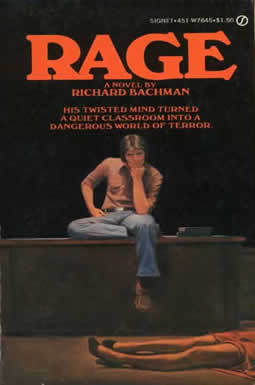 The narrator is Charlie Decker, a senior at Placerville High School in Placerville, Maine. The story begins in the morning when Charlie is called to the principal’s office from his Algebra 2 class. Mr. Denver wants to talk about the incident that occurred two months earlier, where Charlie had struck his chemistry teacher, Mr. Carlson, with a pipe wrench.

In the middle of the talk, Charlie suddenly snaps and responds with a series of insulting remarks towards Mr. Denver which causes him being expelled immediately. Charlie leaves the room and retrieves a semiautomatic pistol from his locker. He sets the locker on fire and returns to his classroom. He fatally shoots his teacher Mrs. Underwood and then, Mr. Vance who enters the classroom to notify students of the fire alarm. The rest of the class becomes his hostage and everyone starts telling their life story.

Wow. Reading this book while there were two or three police vans came and left my apartment’s parking lot created a real scene for me. I have no idea what happened and which unit was involved in any crimes or as a victim. It looks serious though as they took the whole day with a police dog van, a few containers and brown bags (evidence bags, I assume) were taken out from this building, and four cars being towed away.

Well, back to this story, I wasn’t aware that the publication of the book already ceased by Stephen King until I read another reader's comment on Goodreads. Wow. Further reading about the reasons behind the ceased publication was quite shocking to me. Hm. So, the shooting didn’t only claim innocent lives but also genuine readers or Stephen King's fans like us who just want to read his novel without any intentions to realize the ‘fiction’ into reality. I did a search as I’m curious about the current price of the book and another shock came to me. It costs $425 but a new one can cost up to $1000. Wow. I’ve never seen such an expensive novel. Imagine if one day Stephen King changes his mind to re-publish the book and I will be interested to see how the price goes.

Rating: ★★★★
More reviews can be found on Goodreads: Rage.

Once, there was a china rabbit named Edward Tulane who was loved…

This book consists of 284 fables and some illustrations. These stories teach…