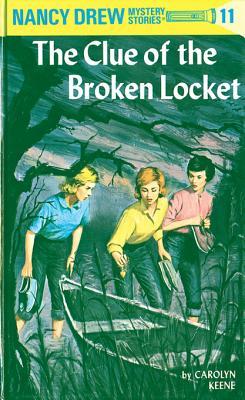 Mr Drew has a client Lawrence Baker who owns a summer cottage at Misty Lake. Before Mr Baker leaves to Europe, he rented his place for two weeks to a young woman called Cecily Curtis. The caretaker Henry Winch leaves the key and a note to Mr Drew, asking Mr Drew to hire someone else because he is scared. Meanwhile, Cecily Curtis will be arriving at Misty Lake late tomorrow evening. Mr Drew has to ask Nancy to drive down there with the key and open the cabin for Miss Curtis. Of course, at the same time, she can investigate what causes Henry so frightened and eager to leave the place immediately.

A rumour was told that ghosts and phantom ship are appearing at night which relate to the passengers who were trapped in a leaked launch several years ago. When Cecily arrives at the cottage, they thought she was the lady that they met before she comes. However, Cecily said that she never been to this place before and she experienced some difficulties in reaching the cottage. On that night, they heard a woman's scream but later realised that sound was from a bird. Then, when Nancy awakes again by Cecily's cat, Cecily is missing from the cottage. Later, when she finds Cecily near the Pudding Stone Lodge, Cecily is on the ground unconscious.

When Cecily wakes up, she tells the girls the story of her great-grandmother's half of the locket which contains the message of a hidden fortune. Her great-grandmother only remembered a big pudding stone house on a lake. Cecily believes that the stone house is connected to the house told by her great-grandmother. Cecily also tells them that she is engaged to a young man named Niko Van Duke, who is a pop singer. Despite e of his fame, his royalty payments don't match its popularity, and Niko is suing the company for cheating him. At the same time, Cecily wants to find the fortune to solve Niko's financial difficulties so that they can get married.

Who is the lady that they saw before Cecily? Are they related due to their look-alike appearance? Why Niko faces financial hardship although he is famous? How both mysteries are connected and how the girls' dates are involved as well? Also, is the ghost ship really appears at night?

"Sleuth" is the author's favourite word in this book. If I read this book when I was young, I think I will like Nancy and probably inspired to become a detective. I will admire her courage and her detective work. But now when I'm reading this story, I felt too many courageous actions, and I felt terrible for my disapproval of her actions taking unnecessary risks.

This is the first story which involves the boys to participate in their detective work. I enjoyed reading it because it's something different, not only focusing on Nancy, George and Bess. But at the same time, as usual, there were so many other stories related to each other. There were so many things happening at multiple places at the same time. I started to lose the storyline towards the end. Although I wasn't fond of Nancy's unnecessary risks, the story itself has extraordinary ideas such as pirated records and children were taken for acrobatic performance.

Rating: ★★★ (3/5)
More reviews can be found on Goodreads: The Clue of the Broken Locket (Nancy Drew Mystery Stories #11) by Carolyn Keene.

The Land Before Avocado by Richard Glover