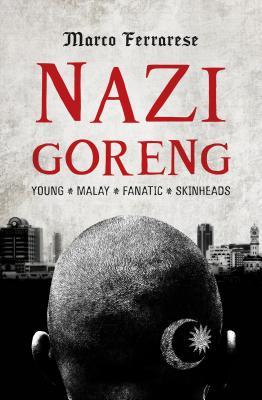 The story begins with introducing Asrul is a religious teenage boy who lives in a small town in Kedah, Malaysia. Asrul is a hardcore punk fan and a rebellious teenager that is easily influenced by new ideas. Asrul's traumatic experience in the hands of a group of Indian thugs has driven him to become a Malay supremacist who views other races as corrupted and also have polluted his nation. I liked the ironic scene portrayed by the writer about Asrul at the beginning of the story - Malik and Asrul looking at the man praying in the mosque while drinking beer.

Asrul is recruited by friend Malik to join a neo-Nazi skinhead gang. They sound patriotic and seem powerful with the name of Kuasa Melayu ('Malay Power'). They move to Penang to realise their racially fuelled teenage dreams by committing petty acts of ethnic violence against immigrant workers and minority groups. Without Asrul's knowledge, he has been dragged into the drug trade, corrupted police officers, Nigerians gangster, and a Chinese drug mule.

'Kuasa Melayu' supposingly is the story's central theme, but it is not heavily associated with the story. They believe in 'Kuasa Melayu', but few actual movements have been done to support their belief. Unless randomly berating at other races and bashing the immigrants is considered an action or "making a statement". The story is about two teenagers expressing their anger and hatred against other races, or two teenagers lost their direction in life. 'Kuasa Melayu' seems is just a borrowed term to attract readers.

Reading this story raises a few questions in my mind. I'm not sure how long the author has spent his time in Malaysia, but I wondered is how an outsider views about racial issues in Malaysia? Of course, this is a fictional novel, but some readers seem not happy with the story because they are trying to reflect it with Malaysia's reality. Putting aside with the storyline of a young Malay boy from a small town who turns into a Malay supremacist, I wondered whether the author expresses his thoughts on how some Malays view other races in Malaysia?

I felt the structure of the story is more concerning than the story itself. The story's flow is difficult for me to follow as it seems jumpy and all over the places. One state of the story tells how the gang was disturbed with the couple kissing at the park. The story then moves away from that state with Asrul recalling how he was approached by Malik after the trauma incident. After the recall, the story returns to the current state, Malik's plan of what to do with the couple intimating at the park.

Should I get angry with the story or disappointed like what other readers mentioned in their reviews? I don't know what kind of expectation I should have before I read the book, so, disappointment is not one of them. The given story plot made me interested in knowing how the author will unfold the story. I felt the story is hilarious, especially when the characters are conversing in local slangs. I don't think it went well when a foreign author tried to inject local slangs into the story, which is why I felt it's funny to read.

Two Bangladeshis talking about their female customers and Asrul feels disgusted with it. So, either they speak Malay or English that can be understood by Asrul, or Asrul understands Bengali. I don't know which one is that.

Somehow, I guess any readers who read any books related to their country will have a certain expectation on the book. It's important to focus on the storyline or the writing style instead of the details' accuracy. After all, it's just a fictional, and any readers should take it lightly. History and travel books are what you need if you are interested to know more about the places (some places are also fictional) mentioned in fictional stories.

To be honest, I felt the writing style is mediocre and more suitable for young adults. However, I would like to give credits for the author's effort and ability to write an English novel although English is not the first language in his origin country. I think the story plot is interesting but too bad, the writing is not strong enough to support such an extraordinary idea. I wonder whether it will be a great book if he tells the story in his own language and gets translated into an English version. There were too many irrelevant details which I have to skim through. The amount of information on every human's appearance from top to bottom is too much for me. However, I have no doubt of the author's ability in background settings due to his extensive writing travelogues experience. The sceneries are brilliantly transformed into words.

Rating: ★★ (2/5)
More reviews can be found on Goodreads: Nazi Goreng by Marco Ferrarese.

A Bigger Picture by Malcolm Turnbull