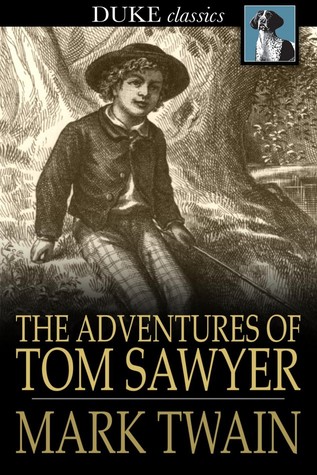 This story is set in the 1840s in the town of St Petersburg located in Missouri. Tom Sawyer, an orphan boy, lives with his mother's sister, Aunt Polly. Aunt Polly loves Tom dearly and very strict with him. Tom is a fun-loving, quick-witted, and adventurous boy who always finds his way to get what he wants. In the early part of the story, Tom was able to trick his friends to do his work in exchange for their possessions. He reveals the fundamental of human nature; that a person most desires what cannot be easily attained. His cleverness enables him to gain all sorts of his friends' treasures, and at the same time, his fence has already whitewashed by his friends.

Huckleberry Finn and Becky Thatcher are being introduced later in the story. Huckleberry Finn is described as an outcast who despised by the adult community but envied by the youngsters for his freedom from the adults. He wears loose-fitting ragged clothes and sleeps wherever he can find a place. He scrounges for his meals and sometimes he goes without. Despite their differences, Tom and Huck are good friends. Becky is sweet and shy. Tom is keen to win her heart and sends a love note to her. Becky agrees to engage with him, although she doesn't know the meaning of 'engage'. However, when Tom mentions Amy, she gets angry and ignores him.

One of the significant parts of this story is when Tom and Huck witness a murder at the graveyard. They flee from the scene without knowing that Injun Joe was trying to convince his drunken friend Muff Potter that he is the murderer. Of course, Injun Joe doesn't know the existence of the boys at the graveyard. The boys make an oath not to reveal the secret to anyone, but the next day, Potter's knife has been found near the murdered man, and the news of the murder has widely spread in the town. However, their consciences are being challenged all the time, especially during Potter's trial at the court.

Tom loves the attention given to him when together with Joe and Huck appearing alive during the church service. He is a very imaginative boy who usually fantasises himself as the centre of the attention and others' guilts when they mistreated him. There are times, the desire for attention has overshadowed his good nature. After all, he still cares about Aunt Polly, and he knew that she has boundless love for him. Tom's maturity is gradually developing as the story progresses. He is more willing to take responsibilities to protect others. This can be seen when he takes the initiative to talk to Becky and take her punishment for their schoolmaster's torn book. When they lost in the cave, he tries to console her, takes the blame for the lost, and tries to search for the exit by himself.

I'm wondering how many children will love or understand this story. I find it slightly difficult to understand due to the old English words, but I'm amazed by the author's rich imagination to create a children's world when writing the story as an adult. Even though the book was written which included some real events of his story, the characters are vivacious as if he is writing someone's life at that time, and not based on recalling his boyhood life. The setting of an adventure-seeking young boy in a 'no worries' world was perfectly created throughout the story. The story also consistently displays the differences between adults' and children's world. Adults' world is far more complicated with social status, and perceptions from others never exist in the children's world, which is simpler and easier to feel content.

Mei Mei is a masseuse at Happy Palace, a massage parlour located…

A Bigger Picture by Malcolm Turnbull