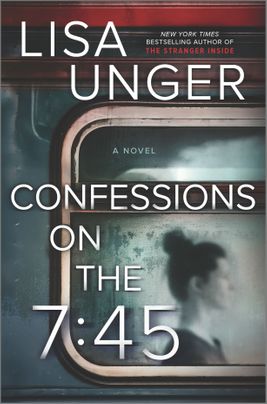 It's not the first time that Selena watches her husband Graham has a sexual relationship with her nanny, Geneva, through the laptop's webcam. She's not sure since her love for her husband has faded, but the feeling of anger, hurt and betrayed definitely boiling inside her. She leaves the office to return home, taking the 7:45 train and finds an empty seat near a young woman who looked almost familiar.

In another story, Anne has an affair with her boss Hugh and leads to an unexpected complication. Anne loves her job in an investment firm that belongs to her boss's wife. She takes the relationship as an advantage for her career but never expects Hugh will fall in love with her. Hugh has been insisting on leaving his wife to start a new life somewhere with Anne. Unfortunately, Anne doesn't share the same wish as him.

In the dim of the train's broken-down car, the woman sitting next to Selena confesses to Selena about her affair with her boss. With the offered vodka in her hand, Selena telling her husband's infidelity to the woman who introduced herself as Martha.

Geneva doesn't understand how she falls into such trouble with her boss's husband. She feels guilty of betraying Selena because she highly respects and admires Selena's capability, and she loves the kids. In fact, Geneva doesn't have a good impression of Graham and tried to avoid his advances in the beginning. And now she is wondering whether she should stop coming to work the next day.

Selena thought that the encounter with Martha is just a coincidence. However, when her marriage is falling apart and still unsure of what to do with Graham, she receives Martha's text message. Martha wants to meet her again, but Selena remembers that they never exchanged their phone number that night.

With the narratives from different characters, I thought I was reading a book with a collection of short stories at the beginning. Then, I remember the synopsis is about the confessions on the train, which means the story hasn't progressed further yet. The main plot was intriguing, and I was eager to know what will happen after the confession. Unfortunately, it started to irritate me when the story was surrounded by too much criticism about men, and every woman wants to get disappeared from their problems. Every man is a problem to the woman no matter she is a victim of the affair or an adulteress. If the woman is an adulteress, she feels distressed because the married man falls in love with her or getting desperate for her. The adulteresses admire and respect their men's wives, and the adulterers seem pathetic in the story.

I felt disappointed with the storytelling because the story started quite well. It stirred my curiosity to know what will happen to Selena and Martha after their confessions on the train. But as the story goes further, the author criticises almost every man in the story and makes them as pathetic as she wants. She empowered the women and created perfection in every one of them, even if they are having an affair with someone's husband. I strongly dislike stories that have too many negativity or criticism of a specific group or gender. Why the author is not focusing on the story but more on targeting a particular gender? And this story is getting more towards promoting feminism instead of focusing on the story itself.

Wasn't it only men who implied that women couldn't work well together? She'd never had problem with female colleagues. In fact, quite the opposite. Any leg up she'd ever had professionally had been due to female mentors and friends.

Men didn't get it. They didn't understand what a chaotic rush it all was, how much email flooded your inbox, how many administrative tasks passed by your eyes - work, school, the business of running a home, a family. Doctor appointments, dentist visits, haircuts, this request for a donation, that birthday party invitation.

All these women - her mother, herself, the girl in Vegas, Geneva, Jacqueline, even Pearl - fucked over by terrible men. They were lied to, cheated on, beaten, killed because of male whims, male problems, their loss of control. Her father, her husband.
Why were they so broken?

I felt terrible if 'Selena' is a real person created by the author. Or probably Selena is a real person that the author hates in her real life? The character 'Selena' was well-written at the beginning of the story. Then, the character is in destruction and more revelation of the ugly side of her. Selena is getting more ego, manipulative, and has a lot of rage and jealousy in everything.

What did someone like Evie want? She wanted what everyone wanted these days, to be a star, someone wealthy and lauded for no good reason. She wanted to be perfect. No. She wanted to appear perfect to others.
But nothing was ever perfect. Nothing real. So it was a losing battle that left her feeling perpetually empty.

Fear. People who drove themselves that hard were usually afraid of something. What did people like that want? They wanted to be the best, to have the most. Because being the best meant that they were safe from harm.
But no one was ever safe from harm. Not really.

And the characters have a lot of questions to themselves and often answering their own questions.

She loved her life, didn't she? All those smiling social media posts - #grateful #blessedtobestressed #lovemyboys - that's what she put out there."
…
…
"But had she been happy?

"But what the woman on the train said was true, wasn't it? Bad things happen all the time. Randomly. When you least expect it."

Was it a lie to only show the glittering moments? What about the dull, the mundane, the ugly? If they weren't posted online, were they less real? Graham wanted to know: Why post at all? What are you trying to prove?

It happened, right? Even to nice girls like Geneva. Who wasn't such a nice girl, after all, was she?

Was that true? Did it require more strength to stay in a bad marriage, or to walk away?

Why did she let him do it? Why didn't she make him come clean to the police? Because she couldn't.

The story is lacking structure and seems missing some key points to hold the story together. It was bits and pieces here and there, and there is nothing to create a connection to turn into an enjoyable account. Most of the characters are one-dimensional and lacking development as the story progresses. I felt the writing style is shallow, and the number of questions and answers are really unacceptable for me. Why created so many doubts? I've never read a story that keeps asking questions and follows up with the answers. Initially, I thought this is the author's debut novel until I read someone's review about reading her books for more than ten years.

The strange thing is the writing style for other characters are different from Selena. The author tried to portray Selena as a confident woman, but there are so many doubts about herself at the same time. In contrast, Pearl's story was well-written and probably the best among all the characters in the story. Initially, I wanted to rate this book with 1 out of 5 because I couldn't tolerate the feminism, overly critical, toxicity, and too many Q&A sessions. However, I felt alright with other characters. It's just Selena that I'm not sure why it has a different writing style, and it was so poorly written.