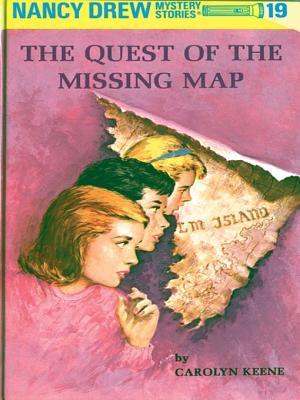 Ellen is hesitant to go to Rocky Edge to meet Mrs Chatham because she has heard many strange things about Mrs Chatham and her daughter. She wants to take the position as a piano teacher, which requires her to live there and look after a seven-year-old girl named Trixie.

Nancy agrees to go to the estate with Ellen. While Ellen discusses the job with Mrs Chatham, Nancy asks Trixie to show her the place around. There is a tiny cottage nearby which Trixie calls the Ship Cottage. She tells Nancy that the studio is haunted. I wish Nancy would treat Trixie nicer instead of forcing her not to believe in ghosts. The little girl is scared and doesn't want to go to the cottage, but Nancy is hesitant to leave because she is obsessed with mysteries and wants to show Trixie that ghosts don't exist. Nancy goes to the studio by herself. She tries to play the piano, but no sound comes from it, but later, the keys work well.Then a cruel bearded man suddenly appears from a secret panel and warns her to leave the place.

Meanwhile, Ellen's father, Tomlin Smith, has a half torn map divided between his twin brother. The map has the location of an island with buried treasure. Tomlin couldn't find the treasure and also his twin brother's whereabouts. At the same time, another man called Mr Rorke is interested in buying the map, but Tomlin has rejected his offer. Since hearing the story about the map, Nancy has experienced several dangerous situations. She is followed by a married couple, and later, they try to kidnap Nancy for the treasure island map.

In this story, we get to know that Nancy is very skilful in arts and drawings. She can accurately copy a treasure island map and precisely sketch the burglar's face leading the police to recognise that the burglar is a well-known thief.

The story seems out of pattern than the usual stories. Firstly, Hannah was wrongly written as Miss Drew. Then, Hannah is portrayed as someone who will leave a kid alone in a house because she is angry with something that doesn't make sense. No matter what, Hannah will never abandon a child just like that. She is a responsible housekeeper, and she will never leave Trixie alone after Ellen is not around. It doesn't make sense that she left because she's angry with the cook for not preparing her food or not allowing her to prepare her meal. It's not a convincing reason that can anger Hannah. Also, why Nancy is asking Ellen and Hannah to stay at the unsafe house? Why is Nancy not asking George who knows judo? Why does Mrs Chatham leave the daughter Trixie at home and ask Ellen to care for her daughter? They only met a couple of times. Why not suggest Trixie stay at Nancy's house under Hannah's care? I feel it is more convincing if the kidnap happens when the mother brings Trixie along to New Kirk or even at Nancy's house seems more believable. It's hard to love this story when there are too many loopholes and traps set for Nancy.

Everyone is so rich in the Nancy Drew series. They can charter a ship whenever they want, and someone will pay for the expenses for more than ten people travelling to South Atlantic. In the previous story, Carson Drew is so wealthy that he can buy any house as long as Nancy likes it. Also, everyone has a lot of idle time whenever Nancy needs help or goes to parties and trips. Sometimes, I feel envious of the characters in the series. Everyone's life is so perfect, and even if the victims have trouble in their lives, Nancy will give them a happy ending.