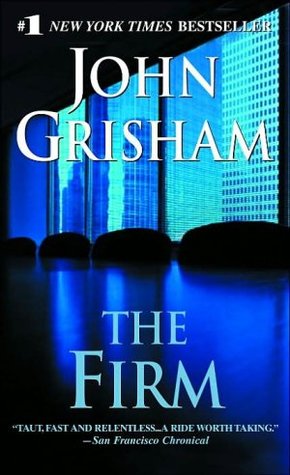 A lawyer has just graduated from Harvard is being offered by a small law firm in America. The firm offers Mitch with eighty thousand a year, a BMW, and a low interest mortgage. He accepts the job with all the benefits as well.

Soon the nightmares begin. There are bugs in the new bedroom, in the car, the mysterious deaths of colleagues, and millions of dollars of mob money pouring out from the office to the Cayman Islands that the FBI will do anything to trace. Mitch finally realises that the firm has a conspiracy with the mafia family and handles a lot of dirty jobs. He has to choose whether to stay with his dreams or cooperates with the FBI.

Here are some of my favourite quotes from the book:-

"No law student or lawyer in his right mind enjoyed research, yet, without fail, every prospective associate professed a deep love for the library."

"The poverty hurt, and they assumed, correctly, it had bred the intense desire to succeed."

"Because alcohol and lawyers go together like blood and vampires. Most lawyers drink like fish, and the profession is plagued with alcoholism."

"They won’t hire a lawyer with other sources of income. They want them young and hungry. It’s a question of loyalty. If all your money comes from one source, then you tend to be very loyal to that source. The firm demands extreme loyalty."

"When you were in law school you had some noble idea of what a lawyer should be. A champion of individual rights; a defender of the Constitution; a guardian of the oppressed; an advocate for your client's principles. Then after you practice for six months you realize we're nothing but hired guns. Mouthpieces for sale to the highest bidder, available to any body, any crook, any sleazebag with enough money to pay our outrageous fees. Nothing shocks you. It's supposed to be an honorable profession, but you'll meet so many crooked lawyers you'll want to quit and find an honest job."

Deny. Deny. Deny. His criminal-law professor at Harvard had been a radical named Moskowitz, who had made a name for himself defending terrorists and assassins and child fondlers. His theory of defense was simply: Deny! Deny! Deny! Never admit one fact or one piece of evidence that would indicate guilt.

Eating and smiling and chatting and fraternizing with criminals, regardless of how rich and polished, was less attractive than sharing a bowl of soup with a homeless down at the bus station.’

Rating: ★★★
More reviews can be found on Goodreads: The Firm.

Recently, I just read a book entitled ‘Book of the Dead’ by…

If you never read this story before, you will never know that…