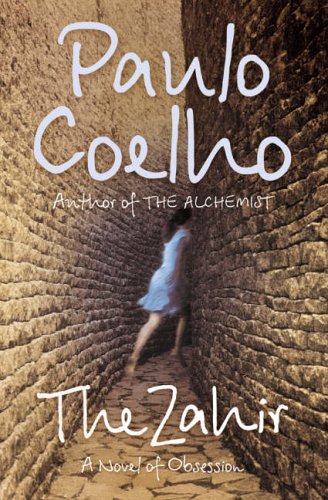 What is the meaning of ‘Zahir’? According to the writer Jorge Luis Borges, Zahir origins from the Islamic tradition and it believes that this started around eighteenth century. In Arabic, Zahir means a person or an object that has the power to create a visibility or presence in the person who sees it and it occupies in the person’s thoughts until the person can think of nothing else. This perception can be considered either in a state of holiness or madness.

As in this story by Paulo Coelho, this inspirational book tells a story about a man who is searching for his missing wife and also for his own truth of life. Obviously, his wife is his 'Zahir'. I’m still reading this book but I feel this is definitely worth for reading. The story not only inspires us in different ways but also shapes our thinking and leads us to question the meaning of our life. I personally feel the author’s perception of life is so true and if you have the chance to read this book, I certainly believe that you will also start to take a moment to think about your life or maybe your relationship too.

I am a Free Man

While I was fighting, I heard other people speaking in the name of freedom, and the more they defended this unique right, the more enslaved they seemed to be to their parents' wishes, to a marriage in which they had promised to stay with the other person 'for the rest of their lives', to the bathroom scales, to their diet, to half-finished projects, to lovers to whom they were incapable of saying 'No' of 'It's over', to weekends when they were obliged to have lunch with people they didn’t even like.

Slaves to a life they had not chosen, but which they had decided to live because someone had managed to convince them that it was all for the best. And so their identical days and nights passed, days and nights in which adventure was just a word in a book or an image on the television that was always on, and whenever a door opened, they would say:
'I’m not interested. I’m not in the mood.'
How could they possibly know if they were in the mood or not if they had never tried? But there was no point asking; the truth was they were afraid of any change that would upset the world they had grown used to.

I know that freedom has a high price as high as that of slavery; the only difference is that you pay with pleasure and a smile, even when that smile is dimmed by tears.

My heart might be bruised, but it will recover, and become capable of seeing the beauty of life once more. It's happened before, it will happen again, I'm sure, When someone leaves, it's because someone else is about to arrive – I’ll find love again.

And the feeling I had in the Champs-Elysées returns: the more beautiful everything is around me, the more wretched I feel.

All you have to do is to pay attention; lessons always arrive when you are ready, and if you can read the signs, you will learn everything you need to know in order to take the next step.

I don’t know how long this dream will continue, but I decide to live each moment as if it were the last.

Some people appear to be happy, but they simply don’t give the matter much thought. Others make plans: I’m going to have a husband, a home, two children, a house in the country. As long as they’re busy doing that, they’re like bulls looking for the bullfighter: they react instinctively, they blunder on, with no idea where the target is. They get their car, sometimes they even get a Ferrari and they think that’s the meaning of life, and they never question it. Yet their eyes betray the sadness that even they don’t know they carry in their soul.

Very few people actually say to me: "I'm unhappy." Most say: "I'm fine, I've got everything I ever wanted." Then I ask: "What makes you happy?" Answer: "I've got everything a person could possibly want – a family, a home, work, good health." I ask again: "Have you ever stopped to wonder if that's all there is to life?" Answer: "Yes, that's all there is." I insist: "So the meaning of life is work, family, children who will grow up and leave you, a wife or husband who will become more like a friend than a real lover. And, of course, one day your work will end too. What will you do when that happens?" Answer: there is no answer. They change the subject.

No, what they say is: "When the children have grown up, when my husband – or my wife – has become more my friend than my passionate lover, when I retire, then I’ll have time to do what I always wanted to do: travel." Question: But didn’t you say you were happy now? Aren’t you already doing what you always wanted to do?" Then they say they’re very busy and change the subject.

Two thousand years after the birth of Nazism, in a bar in Tokyo, a city that has been inhabited for five centuries now by tall, blue-eyed people, Hans and Fritz are enjoying a beer. At one point, Hans looks at Fritz and asks:
"Fritz, do you think it was always like this?"
"What?" asks Fritz.
"The world."
"Of course the world was always like this, isn’t that what we were taught?"
"Of course, I don’t know what made me ask such a stupid question," says Hans.
They finish their beer, talk about other things and forget the question entirely.

what the eye doesn't see, the heart doesn't grieve over.

But what is freedom? Is it seeing that your husband isn’t interested in what you are doing? Is it feeling alone and having no one with whom to share your innermost feelings, because the person you married is entirely focused on his own work, on his important, magnificent, difficult career?

Quotes from other chapters:

Rating: ★★★★★
More reviews can be found on Goodreads: The Zahir.

Recently, I just finished reading a book written by John Grisham, The…

Recently, I just read a book entitled ‘Book of the Dead’ by…