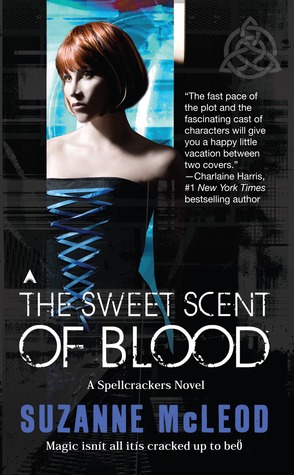 I don't have any comments about this book but I do agree with what other reviewers commented about this novel. The story was quite difficult for me to understand because there are too many characters involved in this story. However, I feel the author has a tremendous skill in writing fantasy stories. The story about vampires and goblins sounded so real to me and seems to exist in real world.

There are a few lines from the book which I feel quite interesting to share it here:

'Mr Hinkley, even if there is another bite hidden by magic, and even if I managed to find it, there is no way I could pinpoint the bitter. I doubt even the coroner could do it, not without an actual sample bite to compare it against. And even then, vamp DNA only points to the bloodline, not the individual vampire.'

Goblin won't let anyone capable of magic touch their master, or allow their master to touch them. Spells are easier to cast with skin contact. Spells came from little bottles or crystals, like those at the Market are witch magic.

When you're dealing with the fae or vampires, you need to be more careful. Don't shake hands, and try not to let them get too near you.'

'Although that's not going to work with the more powerful vampires; they only need to be in the vicinity to be able to catch you in a mind-lock. But you needn't worry too much, the goblin will watch out for you. They're very good at sensing magic of any kind, and even better, they're immune to it.' That was, after all, the main reason they'd become so popular in negotiations involving vampires – and the goblins were minting it, selling peace-of-mind-guarantees to the humans that they were acting of their own free will and not being ripped off via vampire mind-locks.

Rating: ★★
More reviews can be found on Goodreads: The Sweet Scent of Blood.

East of the Sun, Julia Gregson