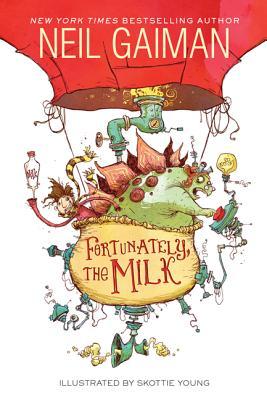 The story begins in the kitchen with two kids want to have breakfast cereal. Unfortunately, they are out of milk. Their father goes to the corner shop to buy more milk so they can have cereal and also for his tea. It takes extremely long for their father to return with the milk. When their father comes home, he tells them about what happened when he was on his way home. It involves of the following which you can try to relate them with your imagination: aliens, pirates, wumpires, hot air balloons, dinosaurs, ponies, and a talking volcano. How all these related to the milk? Does the father able to bring back the milk after the extraordinary adventure?

It's fun to read for kids and the story is quite hilarious. The story is alright but it's just not my favourite. The characters are cute but I still feel something is lacking in the story. I'm not sure what it is. Maybe it's just me. It's not that type of story that I like to read.

Rating: ★★
More reviews can be found on Goodreads: Fortunately, the Milk.

Mr. Popper is a poor house painter who always dreams of faraway…

Harriet M. Welsch is an 11-year-old girl who always wants to be…