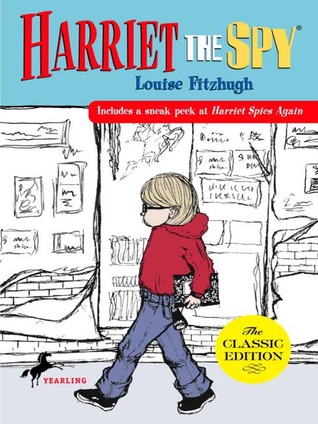 Harriet M. Welsch is an 11-year-old girl who always wants to be a spy when she grows up. She writes down everything she knows about everyone, including her classmates, her best friends (Sport and Janie) and even people who live around her place. She follows an afternoon "spy route" and spies on people who reside in her neighbourhood. Then, she will write down everything in her notebook. She also likes structural life. She eats tomato sandwiches everyday for lunch and refuses for a change. After school, she will have a cake and milk everyday. However, she experiences drastic change in her life when her nanny, Ole Golly leaves her because she believes Harriet is old enough to take care for herself. At the same time, Mr. Waldenstein proposes to Ole Golly and she accepts the proposal.

One day, during a game of tag, she loses her notebook and her classmates find it. They read the notebook and find out that Harriet had written some bad things about each of them. This causes Harriet being ignored by her classmates and her best friends as well. After the incident, she experiences nightmare at night and having a miserable life in school. Will Harriet able to mend her broken friendship with her classmates and friends and what she can do to fix the situation?

It was a mixed feeling for me when I read the book. Initially, I like it and I started to hate Harriet when I found out she wrote a lot of mean things about her classmates. I thought she only write what she sees but she also write what she feels about them. At the same time, I hate the classmates that read the private notebook. Simultaneously, I feel pity of Harriet when she goes through the miserable life in school after the incident. When I was reading the book, I was thinking how Harriet going to correct the situation and really eager to finish the book although it was quite late night already. The solution is an unexpected one but it's a smart way to end the story.

This book really deserves being in top 100 for children books. Although this is a children book, I personally feel this book should be read by adults as well. It brings back some of my school memories. Also, I found some good advices from this book which can apply to our lives. Here are some of the valuable quotes from the book:

OLE GOLLY SAYS THERE IS AS MANY WAYS TO LIVE AS THERE ARE PEOPLE ON THE EARTH AND I SHOULDN’T GO ROUND WITH BLINDERS BUT SHOULD SEE EVERY WAY I CAN. THEN I’LL KNOW WHAT WAY I WANT TO LIVE AND NOT JUST LIVE LIKE MY FAMILY.

LIFE IS A GREAT MYSTERY. IS EVERYBODY A DIFFERENT PERSON WHEN THEY ARE WITH SOMEBODY ELSE?

WHY DON’T THEY SAY WHAT THEY FEEL? OLE GOLLY SAID “ALWAYS SAY EXACTLY WHAT YOU FEEL. PEOPLE ARE HURT MORE BY MISUNDERSTANDING THAN ANYTHING ELSE.”

AND SHE ALWAYS SAID THAT PEOPLE WHO TRY TO CONTROL PEOPLE AND CHANGE PEOPLE’S HABITS ARE THE ONES THAT MAKE ALL THE TROUBLE. IF YOU DON’T LIKE SOMEBODY, WALK AWAY, SHE SAID, BUT DON’T TRY AND MAKE THEM LIKE YOU.

Little lies that make people feel better are not bad, like thanking someone for a meal they made even if you hated it, or telling a sick person they look better when they don’t, or someone with a hideous new hat that it’s lovely.

Rating: ★★★★
More reviews can be found on Goodreads: Harriet the Spy.

What the Witch Left, Ruth Chew