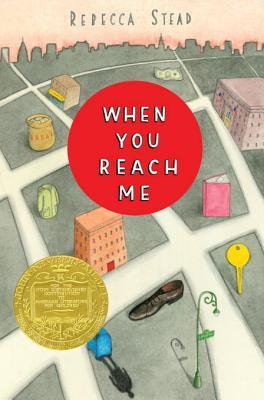 Miranda lives with her single mother who has a nice boyfriend, Richard. Miranda has a best friend called Sal who she knew since she was a small child. They walk back home together everyday. They already familiar with the neighbourhood such as crazy guy on the corner that they need to avoid and the local grocery store which is safe for them to go.

Unfortunately, Sal recently started ignoring Miranda after he had been punched in the face by another boy, Marcus. The apartment key that Miranda's mom hides for emergencies is stolen. Later, Miranda finds a mysterious note asking her to record future events and write down the location of her spare key. Miranda receives three more notes after that. The notes request for a letter describing the future events and the person who leaves those notes claims to save her friend's life. The writer also provides proof or signs of the truth of the messages. The proofs come true and Miranda feels scared. The crazy guy who is also known as the “laughing man” in this story always mentions the words “book bag pocket shoe” which refers to the order and place where Miranda finds the notes – her library book, a bread bag, her coat pocket and a show.

In the meantime, Miranda and her new friends, Annemarie and Colin work in a sandwich shop on the corner and the owner is called Jimmy. Jimmy prefers to give them a free soda and a sandwich each day of their work instead of monetary pay. Then, Miranda, Annemarie and Colin discover a Flintstone bank in the shop. Despite being warned by Jimmy before this, Colin and Miranda wants to find out what's inside the bank. The next day, Jimmy fires them and thinking one of them stole the Flintstone bank. They send him a card and insist that they did not steal the bank. Jimmy believes them and allows them to work at the sandwich shop but he accuses Julia for stealing due to racism. Julia is their classmate and also Annemarie's best friend. Annemarie is furious with it and she quits her job.

At school, Julia scolds Miranda for letting Annemarie to drink soda and eat sandwiches and stop eating her special diet. This is due to the reason that Annemarie has epilepsy. Miranda explains that she isn't aware of it. One day, Miranda was home alone. Someone taps on her door and this scares her a lot. She looks through the peep hole and sees Colin. When she opens the door, he looks at her and then kisses her. She kisses him back and Colin runs off.

One day, Marcus sees Sal on the street. He wants to apologise for what he did but Sal runs away. Marcus keeps chasing him and Sal runs onto a street right ahead of an oncoming truck. Before the truck can hit Sal, the laughing man kicks Sal away, sacrificing his own life. At the same time, Miranda finds the fourth note in Richard's shoe. She later realises that the laughing man came from the future to save Sal's life. The note requests Miranda to write the story of recent events and send it to the person by hand.

When Miranda appears on-stage for the $20,000 Pyramid show, she suddenly remember her previous conversation with Marcus. Then, she realises that the laughing man is the future of Marcus who has come to save Sal's life. He needed Miranda to deliver the notes to the young Marcus.

I like every character in this story. I like Miranda's classmates. Every character is so cute especially Alice, a girl who always needs to go to the bathroom but too shy to do so. Although I never had a classmate like Alice but I did have classmates like Julia and Annemarie and situations such as jealousy and competitions for friend's affection are common things during school time. It reminds me of my childhood time in school because the characters are very lively in this story.

Here are my favourite quotes from the book:

Mom says each of us has a veil between ourselves and the rest of the world, like a bride wears on her wedding day, except this kind of veil is invisible. We walk around happily with these invisible veils hanging down over our faces. The world is kind of blurry, and we like it that way. a wind blowing it from our faces. And when the veil lifts, we can see the world as it really is, just for those few seconds before it settles down again. We see all the beauty, and cruelty, and sadness, and love. But mostly we are happy not to. Some people learn to lift the veil themselves. Then they don’t have to depend on the wind anymore.

"A lot of people make bad mistakes. But being in jail can make them feel like a mistake is all they are. Like they aren’t even people anymore."

Richard looked at me. "What did the zero say to the eight?” I rolled my eyes. “Nice belt."

Sometimes you never feel meaner than the moment you stop being mean. It's like how turning on a light makes you realize how dark the room had gotten. And the way you usually act, the things you would have normally done, are like these ghosts that everyone can see but pretends not to.

Belle surprised me. "Well, it’s simple to love someone," she said. "But it’s hard to know when you need to say it out loud."

Trying to forget really doesn’t work. In fact, it’s pretty much the same as remembering.

Rating: ★★★★
More reviews can be found on Goodreads: When You Reach Me.

Dr. Temperance Brennan takes on a challenging assignment as a Director of…

Mr. Popper is a poor house painter who always dreams of faraway…