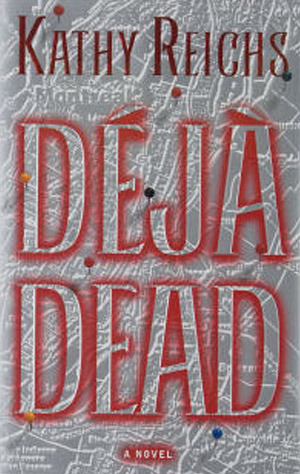 Dr. Temperance Brennan takes on a challenging assignment as a Director of Forensic Anthropology for the province of Quebec. Firstly, she must stop at a newly uncovered burial site in the heart of the city. The dismembered body of a woman is discovered in the grounds of an abandoned monastery. After several decomposed and decapitated corpses being found and stored neatly in plastic bags in different places, she is convinced that a serial killer is at work. Unfortunately, no one else believes her and this leads her to investigate the cases by herself. This determination has caused her and those who are close to her in danger. Will she able to track the killer by herself? Can Tempe find out the identity of the killer before the killer strikes again?

I got to know the existence of the author and her books after I started watching the TV series Bones. I was finding more information about the series and found out that the series are based from the books written by Kathy Reichs. So, I started to read her book. Initially, I had doubts to read this book because I had a bad experience of reading a forensic novel few years ago. My first forensic novel is 'Book Of The Dead' by Patricia Cornwell. That book has too many forensic or medical terms. I personally feel the storyline is confusing and extremely difficult to understand. Maybe she's trying to make it more realistic but it doesn't work for me. The story won't turn out to be a good one if too many jargons being used to fill up the book.

Since then, I never dare to read any forensic novels although I love to watch forensic and mystery TV series and movies. Then, I started to watch the TV series Bones few months ago and I really like it. I wish there is a book quite similar to the series and I found this author. I started to read the book Deja Dead. Since the summary has stated that the TV series is LOOSELY BASED on the books, so, I never put any high expectations before I read the book. But it turns out really good for me. Initially, I feel worried whether I need to read another book with tons of forensic jargons again after I knew that the author is a forensic anthropologist. Luckily, it's not another torture. The storyline is good and easy to follow. I quite like it. It might not an extremely amazing story for certain readers since this is her first book but after reading it, I wish to start reading her second book soon. Although I feel the book is overly descriptive in certain areas but I feel the story considered good enough as a first novel.

Rating: ★★★
More reviews can be found on Goodreads: Déjà Dead.

The Secret of the Old Clock (Nancy Drew #1), Carolyn Keene

Nancy Drew is the daughter of Carson Drew, one of the well-known…

When You Reach Me, Rebecca Stead

Miranda lives with her single mother who has a nice boyfriend, Richard.…