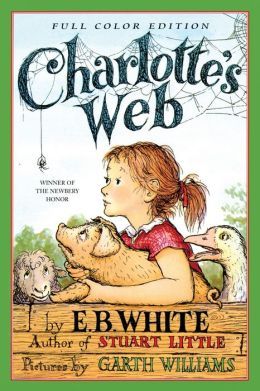 I've been looking for a free time to read this book as I wondered why it always appears in the list as one of the best children books. Based from the book cover, I assumed the story is about a girl called Charlotte with her pets or other animals in the farm. Not until I start reading this book and find out the real story behind the cover.

Fern is the name of the girl who saves the life of the pig which is born as a runt. Fern's father, Mr. Arable plans to kill the pig until she stops him. She keeps the pig and named her new pet Wilbur. When Wilbur reaches five weeks old, it's big enough to be sold and Fern feels heartbreaking with the decision. Mrs. Arable suggests to sell it to her uncle, Uncle Homer so she can walk down the road and visit him whenever she wants.

Wilbur meets a lot of new friends when he lives in the new barn. However, after quite some time, he feels lonely and hopes there is a playmate or someone that he can talk to. In the barn, he meets a new friend, Charlotte. Charlotte is a spider which lives on the rooftop of his pen. Charlotte is the best friend he ever had in his life. When Wilbur's friends telling him that Uncle Homer will kill him one day, Charlotte promises him that she will save his life no matter what happens. Will Charlotte able to keep her promise? What can a spider do to save a pig's life?

No doubt it's a beautifully written story about friendship and family which provides valuable lessons for children. However, it's not my cup of tea. I'm not sure whether it's because of my age or the story.

Rating: ★★
More reviews can be found on Goodreads: Charlotte's Web.