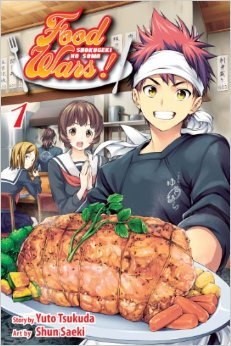 Soma Yukihira is a 15-year old chef who works in his family restaurant with his father, Joichiro Yukihira. He performs a lot of bizarre meal experiments, for example, grilled squid legs in peanut butter. He trains himself everyday in the restaurant with the aim to surpass his father's culinary skill. Until one day, his father decides to go for a cooking trip around the world and closes the restaurant for three years. This leaves him to attend Totsuki Saryo Culinary Institute, Japan's premier cooking school where less than ten percent of its students every graduate.

Most of the students who join Totsuki are from wealthy families except Soma. However, when the entrance test comes and Erina Nakiri is the judge of the test, none of them stays to take the test except Soma. Who is Erina Nakiri? Why everyone scares of her? With Soma's culinary skill, will he able to convince Erina and pass the test?

I have mixed feelings about this story. The plot was not bad and inspirational to the readers of not giving up to become better in what we do. Although I felt confused in certain parts of the story but the mangaka was creative in expressing the tastes of the food with the fantasy which appears in every character after tasting the food. Besides of that, I can't think of anything else about this story. Neither good nor bad.