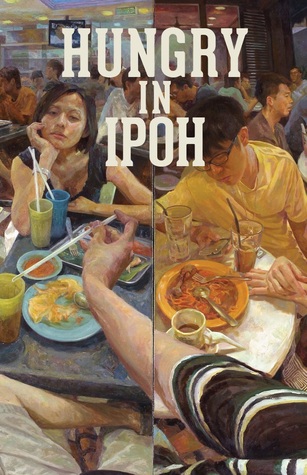 It's difficult to convince readers to obtain a novel comprising short stories, unless there is a review which include a brief synopsis of all these stories.

I felt that it's important to have a brief introduction to each story, in order to attract more readers to support our local authors. This is especially true if this is their first published story, which really needs more encouragement, support and feedback for their passion and contribution to our local literary scene.

I really hope there’ll be more similar English novels being published, or more Malay novels being translated into English in the future, so that the Malaysian English literary scene can be more known widely to the world, as well as to showcase our literary works are competitive enough on the international stage.

Some of these stories are really good which fits in with the title, while there are others which are just average. In fact, I felt happy that there are more Malaysian English literary works are getting published as years go by. I've included a brief summary of each story and my personal rating for it. I hope you will enjoy the book as much as I do :)

"No Kick" by Terence Toh
This story is about Jin who takes over his father’s hor fun stall, and its secret recipe for such a delicious hor fun (which attracted so many customers for so many years) is far beyond our expectations. What is the secret ingredient which passes from one generation to the next to create the "kicking" taste in the hor fun?

This story is a good opener for this novel. I’ve read a similar story before - The Troop. Although I felt disgusting and gross after reading this, it was probably not as difficult as a first-time reader who reads such a story. Overall, I felt the story can leave a strong impression on the readers. I’m wondering how many people will think twice before ordering hor fun after reading this story :)
Rating: 4/5

"Ipoh Girls™" by Cassandra Khaw
I’ve read a few reviews about this story and it seems a lot of readers couldn’t understand what the author is trying to tell us. It’s not my favourite writing style. I prefer a story which is simpler and more straightforward. This is a sophisticated story and it’s difficult for me to understand what the author is trying to express to her readers.
Rating: 1/5

"Mastura’s Air Lengkong Adventure" by Ted Mahsun
This story is about the madness and revenge of Ariff who attacks a drink hawker and brings him along all the way to a water tower. What is his motive of bringing the drink hawker to the water tower? And how Mastura comes into the picture?

This is another story which leaves a strong impression on the readers as well. It’s advantageous for this story to be placed after the previous story, as the previous one is a sophisticated story, while this one is much simpler and straightforward. I liked how the author left the suspense for a few pages which piques the interest of the readers to continue reading the story if they want to know the reason of the two main characters for climbing the water tower. There will be a few questions that comes to your mind when you start reading it which can only be answered if you finish the story. The story seems full of suspense which makes the readers preparing to read it in a serious way, but I felt the entire story is hilarious. Also, now I know what is "air lengkong" :)
Rating: 4/5

"Beloved" by Atikah Abdul Wahid
This story is about a baker falling in love with a regular customer. This story is beautifully written but it doesn’t leave a strong impression on me after reading it.
Rating: 3/5

"Joget Girl" by Marc de Faoite
This story is about a musician that found his long lost daughter, who is a dancer in the same nightclub as him. I liked this story especially when the author creates a beautiful setting - the atmosphere of 60s with a band of musician playing jazz music in a nightclub. You can visualise the surrounding as you are in the nightclub watching the entire story unfolds.
Rating: 3/5

"Night in a Garden in Ipoh" by William Tham Wai Liang
Hector and his family return to Ipoh to get some peace and quiet after his father had a stroke. The narrator is a ghostwriter and she is writing the history of Hector's family. What is the dark secret behind the success of Hector’s father? Why the narrator is so interested to know about Hector’s family?

I liked the story especially with the double unexpected twists at the end. This story also utilises the history of Japanese invasion which enables the readers to understand the history of our country.
Rating: 3/5

"The Art of Food Plating" by Eileen Lian
This story is about a Singaporean woman who needs to move to Ipoh with her family due to her father-in-law’s illness. If the novel has a different title, this story is considered quite good but since I assumed the title should involves of Ipoh, this story is lacking elements relating to Ipoh. Also, I felt weird when the narrator talks to her six-year-old daughter using words, in which I doubt a kid with her age will understand. However, there is one thing I liked about this story, which is the author successfully portrays a Singaporean’s attitude towards their children’s education.
Rating: 2/5

"The Ipoh Food Court" by Wong Hon Kit
The narrator is being haunted by his perfectionist mother for 33 years, although his mother has passed away long time ago. Some of the signature food in Ipoh also reminds him of his mother and sad memories.

This is one of the stories which really fits to the title of this book. I liked the connections between the food and the narrator’s past memories. I can imagine how depressing the narrator is when he is haunted by his perfectionist mother and every food seemed to remind him to her and the past. This is one of my favourite stories in this book.
Rating: 4/5

"The Ultimate Indulgence" by Tina Issacs
The story is about the narrator hunting for victims to satisfy his blood addict.

I felt this story is loosely based from the epic Raja Bersiong and I just knew the existence of the epic based from this short story. I felt neutral with this story, nothing extraordinary for me.
Rating: 2/5

"More Than Enough" by Leroy Luar
This is an extremely touching story about an old woman coping with the death of her husband. When you are reading this story, you really can feel for her loneliness and also understand how she misses and loves her husband. The entire story (such as details of the background and the memories which she shared with her husband) is very realistic which you really can “feel” it when reading the story. Looking forward for more stories from this author.
Rating: 4/5

"An Epi-Curious Affair" by Julya Oui
This story is about a traditional Chinese family, which is trying to accept their son or brother who returns home from San Francisco with his transgender girlfriend.

As a person who was brought up in a traditional Chinese family, I felt this story can really portray a typical Chinese family in Malaysia, and also the difficulties of the older generation in accepting transgender. Generation gap often occurs when both generations can’t understand each other, especially if something that never or rarely occurs during their time. In this regard, transgender never or rarely occurred in the olden days. In a different example, the younger generation can’t understand how the older generation is able to survive without the Internet.
Rating: 4/5

"Mother's Manifesto" by Angeline Woon
The narrator and her family return to Ipoh and this reminds her of her childhood memories in the mansion as well as her silent resentment towards her mother, husband and son.

It’s a simple story but the narrator's feelings exist towards other characters are complicated.
Rating: 3/5

"Finding Way Home" by Benjamin Tham
The title is explanatory enough to describe the plot of the story. A taxi driver, who has just argued with his family due to a misunderstanding, is coping with his guilt when a mysterious girl wants a taxi ride to her home. However, the girl has forgotten her way home since she left her family for quite some time. Who is this mysterious girl and will she be able to find her way home? What is the story behind this mysterious girl which changes him to resolve his problem with his family?

Funny Mountain" by Ivy Ngeow
After 5 years being out of Malaysia, Yew Tee returns to Ipoh to visit his father and his ill stepmother, who is no longer able to recognise him anymore. The return to Ipoh has brought back a lot of Yew Tee’s childhood memories, especially his relationship with his stepmother. As he spends more time with them, he realises how good it is to return home.

I liked this story as it has a lot of details about the places of Ipoh. Although the story doesn’t leave a strong impression on me, but I liked the story surrounded with the details of places and food in Ipoh.
Rating: 3/5

"Pau Babi" by Tilon Sagulu
An outstanding story about a woman who is married to a Muslim, and is craving for a pork bun or also known as 'char siew pau'.

You can imagine or feel the constraints that Mei Ling faces and her cravingness for the pork bun, thanks to the author’s brilliant descriptions about the tasty pork bun and the comparisons for life before and after marriage.
Rating: 4/5

I rated this book with 4/5. The stories involve various kinds of relationships with Ipoh as the main focus. Most of the stories are quite interesting and I get to know more about Ipoh which makes me wonder whether I should travel to Ipoh and explore each place mentioned in this novel.

Rating: ★★★★
More reviews can be found on Goodreads: Hungry in Ipoh.