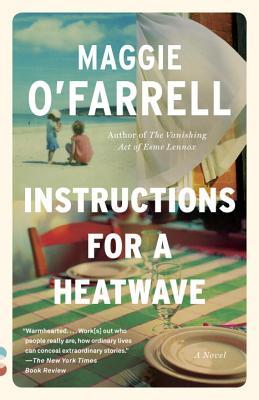 A legendary heatwave occurs in London in 1976. An Irish family, just like other families, experienced water shortages and droughts due to the heatwave. The usage of water is only limited to drinking, shower, washing of clothes and toilets. However, what can be more worse than this Irish family is when Robert Riordan leaves his family without a trace, after telling his wife Gretta that he’s going to buy a newspaper. He doesn’t come back.

Gretta makes a panic call to her children about their father’s disappearance. Two estranged sisters and a brother who experiences marriage problem return home. All of them have different ideas as to where their father might have gone. Arguments occur among them especially for the sisters when they bring up their past which causes the crack in their relationship. The only twist I found in this story is when Gretta’s cousin saw her husband in a convent in Ireland. Everyone starts to question why Robert is there and as more questions began to surface, Gretta opens up her biggest secret in her life which caused a shock to the children.

I had tried my best to finish this novel but towards the end, I just skipped several pages and looked for the dialogues part so I can quickly finish reading it. The beginning part of the story is not bad and I thought of rating this story with a 3 out of 5. However, with the slow pace of the story, I felt the story seems doesn’t progress any further and stays the same after the family finds out the father left them without a trace. The progress is like a graph that stays at the same line even until the end of the story.

Somehow, as I kept reading the book, I’ve no idea what I was reading or whether I’ve missed out any important plots without my knowledge. There isn’t any climax or twists in the story. I tried to like the story but as I read more and more, its rating starts to drop. I just couldn’t like it despite the story having an interesting introduction which was the reason I’ve chosen this book at the beginning. The main focus is the family members, not Robert who disappears from their life. Overall, what you need to know about this story is the emotions, life, and feelings of a family after their husband and father leaves the family with a trace. Nothing unusual.

Rating: ★
More reviews can be found on Goodreads: Instructions for a Heatwave.

Philip Marlowe, a private investigator, got hired by a sick millionaire to…

Bod is a short form for the name ‘Nobody’. He is just…