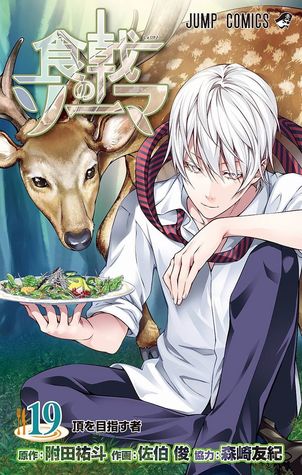 In this volume, Ryo Kurokiba needs to begin his shokugeki battle with Central elite Kusunoki to save Alice’s society from being abolished by the Azami administration. The theme for the shokugeki is salmon and both chefs put everything they’ve got, including their their pride, into their dishes. Will Ryo able to defeat the Central elite and save their society? At the end of the match, what Alice tells her own uncle, Dean Nakiri, which has been troubling her all these time?

In the meantime, the first seat of elite ten – Tsukasa Eishi will be the guest lecturer for some of the lessons in the academy. Eishi admires Soma’s culinary skill and invites him to join the Central. Soma is not interested as he will not have the chance to show his skill if he joins the Central and partner with Eishi. However, a shokugeki is held to decide whether Soma needs to join the Central and be Eishi’s underling if Soma gets defeated by him.

What I loved about this volume is the admiration from the opponent for Soma’s skill which leads to the invitation to ask Soma to join the Central. Also, at least there is a slight twist for the battle with the Central in this volume and unpredictable twist makes the story more interesting.

In the Dark by Richard Laymon

Small-town librarian Jane Kerry finds herself caught up in a mysterious game.…