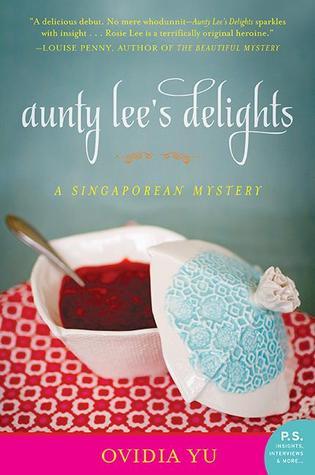 Aunty Lee’s Delights is a Singaporean restaurant runs by Rosie Lee after losing her husband. The restaurant focuses on Peranakan cuisine attracts both the locals and tourists. Rosie Lee also known as Aunty Lee loves to cook and like to serve her food for the wine-tasting parties hosted by her stepson, Mark.

While preparing the food one day, she hears on the news that a woman’s body has washed up on the beach. However, there are not much additional information being provided regarding to the woman’s identity. Aunty Lee is a very curious woman embodies what Singaporean’s call kiasu or fear of losing out. She begins to wonder who the dead woman might be and when two of the guests at Mark’s regular wine pairing are missing, Rosie is quick to begin drawing connections. Rosie soon getting herself involved into the investigation, using her observation and deduction to help the police on the case.

There are other interesting characters in the story such as Selina, Nina and Senior Staff Sergeant Salim. I liked Rosie despite most people feel she’s a very busybody woman. My second favourite character is Nina. I wish I can have a maid like her. She’s funny, caring, patient and very helpful. I doubt anyone likes Selina but her interesting character makes the story more enjoyable. Despite there were times I got confused with certain parts of the dialogues, I still enjoyed reading the story.

Mr. Wong is a feng shui consultant and assisted by Joyce Mcquinnie,…

Patrick Davis is experiencing problems with his marriage and work. In addition…