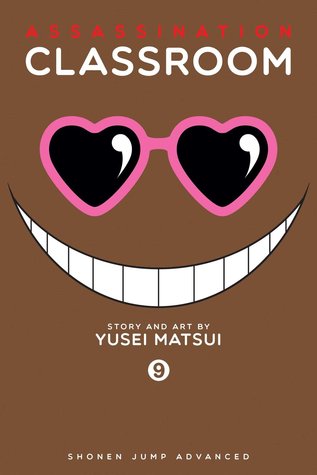 Nagisa fights with Takaoka after he keeps challenging Nagisa to kill him (Assassination Classroom, Vol. 08: Chance Time). He wants to revive his dignity after losing to Nagisa in the previous fight. The three previous assassins return and with a possibility of a rematch. Do professional hitmen kill based on their personal grudges or will they go against their contract after receiving the payments?

After Korosensei back to his normal state, he comes up with a 'Test of Courage' game for everyone before the trip ends tomorrow. He sets them in pairs and tries to scare them but he's having more fun getting scared. The couple setup doesn't work for most of them but it seems Irina's feeling is obvious towards Karasuma.

Irina never ever lost in seducing any men in her life but Karasuma will be her first failure. She's definitely not his type but there is still hope. She has the support from the entire class but the hope probably is hanging there when someone reveals Karasuma's ideal type which is totally opposite from Irina's personality. Irina tries to confess but we are not sure whether Karasuma able to "get" the message from Irina.

The second semester begins. One of them will transfer to Class A but Korosensei and the rest are still looking after him from behind. As a pawn for the principal, will he be able to fight back from being a pawn or will he choose to be accepted by his family?