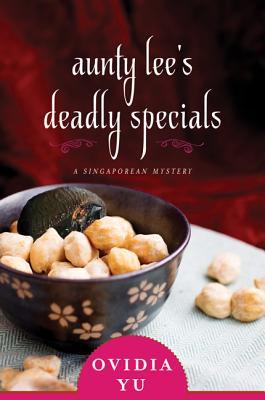 “Aunty” Lee is a rich widow who loves to cook and owns a restaurant that specializes in Peranakan food. She loves solving crime cases, interested in scandals and gossips and likes to go around talking to people to find out more about them.

When the news about an illegal organ donation and a suspicious suicide involving prominent citizens appears on newspaper, this excites Aunty Lee to find out more about it. However, before Aunty Lee has the time for the case, she needs to clear her name when Mabel Sung and her son Leonard are found dead. The authorities blame it on her special stewed chicken with buah keluak, a local black nut that can be poisonous if cooked improperly. To save her business and her reputation, she needs to “dig” more to find the real killer to prove her innocence.

Aunty Lee is a very colourful character. The author has successfully created such a realistic character, a typical Singaporean who is kiasu (fear of losing out) and kaypoh (busybody) especially an elder woman like her. Singaporeans often being labeled by those terms.

The author also explained more about buah keluak and the preparation methods as well as the consequences if it’s not cooked properly. This will be useful for readers that have no idea what buah keluak is. It also reminds me that a few years ago, I’ve eaten that dish and I didn’t know that I need to scoop the contents of the buah keluak. What a waste! I’ve wasted the cook’s effort and time preparing the dish.

Once, there was a china rabbit named Edward Tulane who was loved…