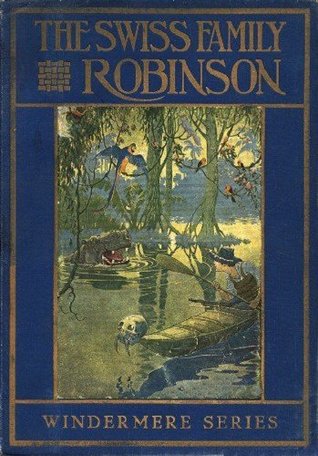 The story begins with the narrator and the family is on a sailing ship experiencing a fierce storm. The ship's crews evacuate without them with the last remaining boat. William and Elizabeth and their four children (Fritz, Ernest, Jack, and Francis) are left to survive alone.

They able to survive the wild storm but alone on the sea. They come out with an idea of using barrels as life jackets and everyone including the animals able to swim safely to the island. Once they reach the island, they build a tent and enjoy their first dinner on the island.

The remaining story focuses on their adventure and discovery on the isolated island. They discovered a variety of living creatures and plants that they never saw before.

I had read this story several times when I was a kid. I didn't realize the family has strong religious faith until I read again this time. I just realized the author was a pastor which explains the religious elements in the story. I still remember the illustration appeared in the book (the edition that I read when I was a kid) which shows the family and the animals in a life jacket made in barrels on the sea. It was a beautiful picture but I couldn't find it anymore.

I have great memories when I read this as a kid. I was so excited that finally, I have the time to read this book after postponing this for several times.

I had tried my best to go through this book. I always thought that The Swiss Family Robinson was just the type of story that I would like. When I first started this book (as an adult), I really enjoyed it. Unfortunately, this doesn’t last long as every chapter is monotonous. I felt disappointed that I couldn’t bear such a beautiful story and I have to skip the remaining chapters and jump to the final chapter because I really wanted to know what happens in the end. My decision wasn’t a bad one because the remaining chapters seem almost the same to me.

Random thought. How I wish kids nowadays learn to appreciate nature and possess some knowledge of basic survival skills. I don't think kids nowadays can survive on the island because there isn't any Internet available to Google what they should do if they stranded on the island. Ouch!

Rating: ★★
More reviews can be found on Goodreads: The Swiss Family Robinson.