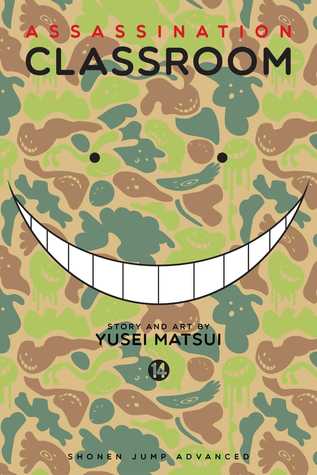 This volume continues with the Class E's students preparing for their stall for the school festival. At the same time, someone whom they had offended in the past is coming to them for a revenge.

Once again, Nagisa needs to impersonate as a girl to earn more money for his class. Nagisa not only has to hide his gender but also various dark secrets of his class from his "fan". Ironically, the customers are increasing and most of them are invited by Korosensei who failed to kill him. However, the increasing number of customers doesn't convince them that they can defeat Class A.

On the second day, it was a big change. The TV crew visits their stall and there's a long queue of customers waiting for their food. Who has such a great influence to attract more customers to their stall? Is that sufficient enough to defeat Class A?

The final exam is coming soon. Class A has a new teacher, which is, the Director himself who has the ability to brainwash and manipulate people with his strange charisma. Due to the Director's hidden agenda and the condition of Class A's students are getting worse, it pushes Asano to ask for help from Class E's students. What is his plan to battle with his own father?

Two top students in Class A and Class E, respectively, have a different interpretation for the final question in the Maths test. This will decide who will be the winner for this time.

Due to the unexpected circumstances, the Director demolishes the Class E building and moves them to a more restricted and confined building. A huge decision has been made against Korosensei which might cost his life.

After a few average stories, finally, this volume has more impact and plot twists.