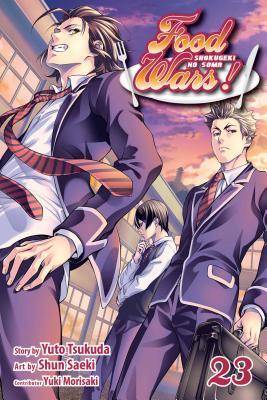 This volume continues with the story of the battle between Soma and Hayama (Volume 22: Shokugeki no Soma - Rematch With a Rival). When Hayama tries Soma's dish, there's a self-reflection occurs inside him and he realized how he loses himself along the path to become a chef. With Shiomi-senpai comes along and gives her advice to Hayama, Hayama starts to remember of being himself.

Meanwhile, the third exam was also taking place at the same time which includes Ikumi Mito, Isami Aldini, and Hisako Arato. All of them face an unexpected result.

Although Erina passes her exam, the only thing she worried is her friends. At this time, Aida Shawn, Nakiri Azami's aide appears in front of them. He breaks the latest news about the results of others. At the same time, Rindou-senpai comes and she tells them what happened during the battle between her and Aldini and Tadokoro-chan. Almost every rebel member has been expelled after the exam and only four members left.

With only four of them, Soma comes out with an idea to rescue their friends. Erina decided to asks her father, Nakiri Azami to take back the others' expulsions. However, when Soma tries to propose his idea to Azami, Soma's father, Saiba Joichiro and Erina's grandfather, Senzaemon Nakiri appears. This leads to Tootsuki's traditional irregular shokugeki between Saiba and Azami.

When a dispute between students cannot be resolved, teams battle teams will be held to settle the dispute. This team battle is called 'The Regime de Cuisine'. Both teams will decide which opponent that each member will face. The winner will continue to battle against the next opponent until only one side has members left.

I'll leave the entire story out of this summary. It was one of the best or probably the best part of this volume. I really don't want to spoil it and I believe you will love this story even more if you read it yourself when there's no expectation or a single clue beforehand.

Their story about the past explains the reason behind the change of Azami and why Saiba's appearance will be a good bait. In order to prepare for the battle, the special training begins immediately on that night.

This volume has a lot of meaningful stories. This volume focuses on successful people who lose themselves and blinded by their success which comes together with power and fame. A true success comes from an inner success where you feel happy with what you do instead of the fame and nice labels that others put on you.