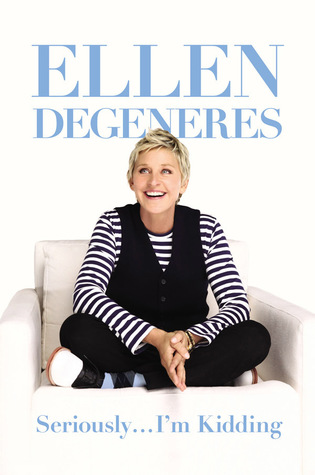 This book is not a typical autobiography with long sentences and bombastic words written in a serious manner. This autobiography is worth for a casual read which consists of funny stories based on Ellen's life. Most importantly, it's about what she thinks, and she points out some of the cruel facts about the current world which we probably never pay attention about it all these time.

Sometimes, social media makes you comparing your life with them, and you start to feel pathetic about your own life. Some people don't have that intention to show off their lives by sharing their travel photos or how good her husband is. They probably just want to share their happy moments but in out of X followers or friends, how can they be so sure everyone has a positive mind? What if there is a friend who is struggling to get a job for several years or someone who had experienced several times of breakups or maybe a friend who has an abusive husband? I mean sharing your happy moments is not a crime, but you don't have to share it or almost every day continuously.

The funny thing about life comparison in my life is others tend to compare theirs with me especially during my school days which I felt kind of joke until these days. My grades were average and sometimes even below average but the funny part is my classmates, and even those with outstanding grades like to compare with me or see me as a competitor. Sometimes, I feel probably because I always work hard and seldom hang out with them outside the school, they thought I might pull out a miracle one day, but I was just an ordinary person struggling not to get a fail grade. Or maybe comparing with me made them feel smarter? Sometimes, I wasn't sure they really shocked or being nice by acting shocked when every time they know about my grade. Or maybe they feel guilty that I worked so hard, but they got a better grade.

I always feel funny when seeing people busy comparing with others. I had a classmate in uni who likes to compared with me. She is academically smart but not in other areas, that's what I feel. She often asked about my grades almost every term. Sometimes, I felt annoyed because I didn't feel she deserved the grade that she got, and I can see that other classmates felt the same as well, but she was so happy with it. I guess I'm upset with people who don't deserve to get a good grade and they feel happy with it. I'm upset with people who deserve to get a good grade, but they didn't, and they get worse than those who don't deserve it. But I don't get upset people have better grades than me.

I'm always busy being myself and I don't have time to compare with others. I feel funny seeing others so busy comparing with me, but I don't even have time to take notice of their concern or their caring about my achievement. Sometimes, I feel great to see someone that they thought their grades were worst and because I have the hardworking attitude (which is a delusion to them) and they feel better of themselves after they know my grade, which is not what they were expecting. For me, a grade is just an alphabet or a number. Nobody will ask for the specific alphabet or number as time goes by. Until now, I've never heard any of my "outstanding" ex-classmates have any "outstanding" achievements or became an astronaut or whatsoever. In fact, several years ago, I had an "outstanding" high school ex-classmate who scored 100 in her Math, telling me that she paid someone to do her uni programming assignment whereas a struggling and non-outstanding student like me had never paid anyone to do my assignment when I was in uni. Sometimes I got A too, and sometimes I don't but to be honest, I really enjoyed the process of writing, debugging and fixing the codes. Well, since she's not in IT and programming is just an elective, maybe she doesn't need that skill. Just thinking positive for her.

I entirely agreed with the common courtesy about being on time, and I thought maybe I'm outdated (although I know courtesy has nothing to do with trends) or I'm too stubborn with my upbringing. I'm very particular about being on time. If I'm late, it's usually because the person who is with me or the person who picks me up. Maybe another blame probably a sudden addiction to another new game which drags me from preparing myself. To be honest, nowadays, people really suck being on time, and if they are late for an hour, they act as nothing happens and just enjoy their time, but I feel my day has been ruined by them. My maximum waiting time is fifteen minutes but if more than that, I hope the reason is related to urgency or something out of sudden. I like to be early, but some people are just wondering why we need to arrive so early? What's wrong with arriving early? In fact, it can be a laughing stock or someone thinks you are an alien if you want to arrive early. I just don't understand their mindset. Maybe because I had faced a lot of such people, I tend to think whether the problem it's me. Am I being old-school, like listening to my parents and being on time and earlier for every events or appointments whereas nobody cares about that anymore? Well, at least I know there's one person in the world has the same thought as me. I personally feel being on time is to respect and appreciate the host (remember, they have the choice not to invite you) and most important for me is I can avoid the embarrassment if I'm going to a place where the late ones gain the crowd's attention.

I've been looking forward to reading this book for quite some time. I won't say it's a disappointment because I feel some of the things are quite true, but it wasn't a superb either. There was tremendous of positive energy throughout the book. It's probably just me that I felt the book was a bit boring towards the end. Ellen seems just blurted out everything in a book as if she is really talking to you face to face.