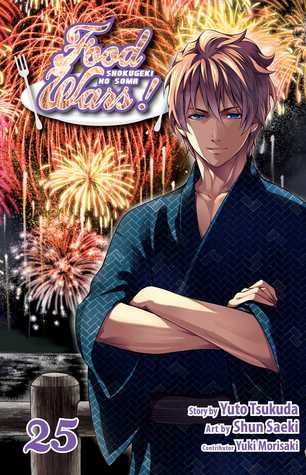 This volume begins with the team battle continuing from the previous volume (Food Wars Vol. 24: Welcome to the Final Battleground). Isshiki-senpai faces Shiratsu Julio, one of the new elite ten members and has experience in Italian cuisine. The theme ingredient for their battle is the eel. Shiratsu has a lot of admiration and respect for Isshiki's talent and hopes they will work together in Central although Isshiki can't remember who he is. Shiratsu's insults on the residents of the Polar Star Dorm pushes Isshiki to have the determination to defeat him.

Isshiki possesses excellent knowledge and talent in handling eels. The spectators are impressed and shocked since Isshiki never revealed his true skill before to his friends. The Isshiki clan has managed a traditional Japanese restaurant in Gion, Tokyo for generations since the 14th to 16th centuries. The Kinokuni family has had a strong bond with the Isshiki family. As per the tradition of the Isshiki family, their heir is sent to another family to hone their skills. This means Isshiki and Nene Kinokuni are childhood friends.

The judges for the battle are World Gourmet Organisation (WGO) examiners. They evaluated restaurants in the world of high-level cuisine and published them in the book with the best one will earn the highest rating of three stars. The first dish to be judged will be Nene Kinokuni's nine-to-one buckwheat soba and Soma's yakisoba or fried buckwheat noodles. Soma's dish inspired by cup yakisoba or cup noodles which he had been continuously searching for the highest level of flavours since he was a kid. Both dishes are impressive, and the judges have come to a verdict. The flavour of one of the dishes is affected by the temperature, and the humidity in the room whereas the winning dish has maximised the judges' level of satisfaction due to the contestant's detailed consideration for the room's condition.

The second dish to judge is Shiratsu's Capitone in Umido. Capitone is an Italian name for the females of the larger eel species served around Christmas time in Italy. In Umido in Italian means stewing. As for Isshiki, he presents his Polar Star Dorm's version of Hitsumabushi. Hitsumabushi is a dish in which eel is dipped in soy-based sauce, finely sliced and spread over rice but Isshiki's version is more similar to cheese risotto. Most of the ingredients of the dish were stolen from Polar Star Dorm which is still under testing by the residents. It's a dish to represent his rebellious personality to protect his juniors and Polar Star Dorm's reputation.

Before the second round of the battle begins, everyone has an hour of break in the waiting room. Both teams have to decide who will be the next three contestants fight in the second round.