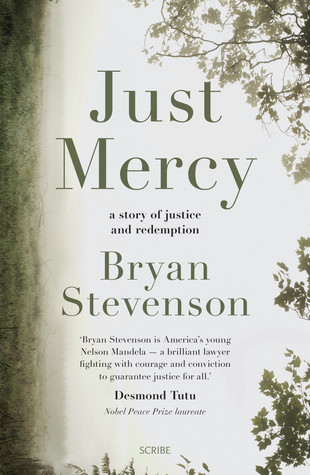 Constantly being suspected, accused, watched, doubted, distrusted, presumed guilty and even feared is a burden borne by people of color that can't be understood or confronted without a deeper conversation about our history of racial injustice.

In the beginning, Bryan Stevenson was a philosophy student. When he realised it's a field that is not only hard to support himself and he can't even offer his skill to help the poor, he chooses Law although there's a difference between his studies and his life goal.

However, when he joined the SPDC as an intern, meeting his first death row prisoner is a life-changing on him. After he graduated, he joined SPDC. On his fourth year, he met Walter McMillian in South Alabama who is facing the death penalty.

The judge's dramatic warnings and McMillan's emotional claim of innocence pushed him to look into the case in a more detailed manner. Bryan begins the story of Walter with a brief version of Harper Lee's famous novel, To Kill a Mockingbird. Walter's background shares a similar life with the main character of the novel, growing up in one of several poor black settlements. Due to Walter's long-sighted skill in business, he started his own pulpwood business in the 1970s. He was generous and respectable by the people with whom he did business, whether black or white. Despite his admirable personality, his success is doubted by the white people in his town and outside of Monroeville's black community, especially for an African American with limited education and the ability to legitimately own his business.

Walter is also famous as a ladies' man although he had married young and had three children with his wife. He was romantically involved with several women, and they easily attracted to his charming nature. Walter grew up knowing how forbidden for a black man to be close with a white woman but during the 80s, he made such a mistake after a few flirtations by Karen Kelly. Karen experienced trouble marriage all these time and was already planning for divorce. Due to her scandalous relationship with a black man, her husband gains the custody of their children and disgracing the wife publicly by exposing her infidelity which involved a black man.

Years earlier, he was involved in a bar fight that resulted in a misdemeanour conviction and a night jail. Since then, he had no exposure to the criminal justice system. When he acknowledged being a friend of Karen in the court after being subpoenaed to testify at a hearing for Kelly's children custody, although he was defended by Kelly's lawyer at that time, his reputation has been tarnished and caused anger to the locals as the word spreads fast. This has been related to the history of slavery supporters who feared interracial sex and marriage and race mixing if slavery is abolished. For over a century, black men who had been intimate with white women were investigated and punished by the authorities in many Southern communities.

Several weeks later (during 1986), a beautiful young daughter of a respectable local family was found dead on the floor of Monroe Cleaners, the shop where the eighteen-year-old college student had worked. She had been shot in the back three times. A murder was uncommon in Monroeville. A few of suspects ranging from two Latino men who were looking for a job on that day and both former and current owner of the shop have been investigated and questioned, but none of them is likely to be the suspect. There were still no arrests after several months, and a new county sheriff has been elected as well. The local authorities have been criticised as incompetence. The people in the county started to get anxious, and gun sales had increased too.

Meanwhile, Walter is struggling to end his relationship with Karen Kelly. Due to the child custody and the public scandal, Karen Kelly began using drugs and associated with Ralph Myers, a white man with a badly disfigured face and lengthy criminal record. They became drug dealers and later involved in the murder of Vickie Lynn Pittman, a young woman from a neighbouring county. Ralph Myers has been changing his story several times and even accusing the elected sheriff is the real killer. When his allegations against the sheriff didn't work well, he changed his story again. The latest story involved of Karen Kelly and her black boyfriend, Walter McMillian. He also accused Walter was responsible for the murder of Ronda Morrison. There was plenty of evidence indicating that both of them had never met.

After seven months, the community is angry, and criticism is building up. The newly elected sheriff was lacking law enforcement experience and facing intense public pressure. Probably the only evidence that they have against Walter is an African American man involved in an adulterous interracial affair although Walter has no prior criminal history and a good reputation.

Based on Myer's statement and some false accusation from a police officer, they arrested Walter and charged him with sodomy. They locked Walter in the cell while continuing with the investigation of the murder. Since the police didn't have substantial evidence to make a case against Walter, they worked together with a jail informant to create a story that is convincing enough to frame Walter that he killed Ronda Morrison.

Due to the eagerness to make the arrest, Sheriff Tate didn't make any further investigation on Walter's whereabouts on the day of the murder. Apparently, Walter and his family spent the day out in front of the house, selling food to the passerby to raise money for the church. Dozens of people including a police officer can confirm that Walter could not commit the murder. The authorities including the district attorney, sheriff, and ABI investigator stick with the McMillian accusation, ignoring the pleas from the family members, church members, black pastors, and the rest. At the same time, Myers started to realise that it wasn't a smart move to get himself involved in a high-profile murder which he has nothing to do with it although he was promised of favourable treatment and no death penalty in an exchange with his testimony. Myers finally admitted that his story wasn't true, but Tate and the inspector pressured him for more incriminating details.

This book tells multiple stories related to the failures of the legal system but focuses on Walter who is the victim of the racism. Most of Bryan's clients are the victims of social injustice and the broken justice system due to their skin colour, disability, powerless or poverty. The further I read this book, the more outrageous I became, and I couldn't believe such a horrendous thing ever happened in real life. I don't understand what they had done to deserve that as if slavery in the old time hasn't ended yet and the white people come up with different methods of torture. The idea of mistreating a human being due to his skin colour is so ridiculous and nonsensical. How can skin colour be used as a judgement although human beings are given the ability to think and analyse but humans humiliate the God's gift with their made-up rule, which is skin colour to define another human's innocence? Despite all the modern inventions, does it means we are not as smart as we thought if human beings are using skin colour as a judgement for fairness? And does it means white people are not civilised yet and if they look at the black people differently, does it means they are still proud of their ancestors' sins?

This book creates my interest to visit Alabama one day and probably I will even take a photo of EJI office. I have so much respect and admiration for their work. As for someone who is not living in the United States, through this book, I was overwhelmed with the other side of the real America especially with the history, the legal system and the black community.

The story also covers different perspectives, including the victims, lawyers, judges, juries, prisoners, geographical location, and the history of racial discrimination in law. Everyone has their own reason for their decision, and other death row inmates have their reasons for their actions as well.

The most impressive part is about a racist correctional officer who gave Bryan a harsh treatment when he paid a visit to his client. However, the correctional officer has a changed of heart after he was in the court with Bryan's client. He saw how Bryan defended his client who is mentally disabled but didn't get the proper treatment for his illness and also resulted from his horrific experience in various foster families.

Rating: ★★★★★
More reviews can be found on Goodreads: Just Mercy: a story of justice and redemption.