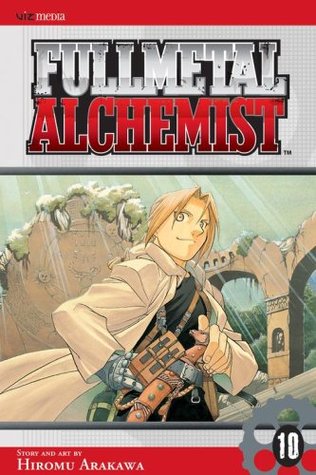 After Rin Yao explains to Alphonse and Winry the reason behind Major Armstrong's abduction of Edward, he notices Lan Fan's signal flare in the distant sky and informs them that the light they see is the "signal to strike". Alphonse reveals that he might know the identity of Maes Hughes' murderer, decides to go along, promising Winry that he will return safely and relate to her everything that happens.

At the same time, Envy struggles against Lan Fan's combat skill, having been "killed" three times at her hand. Envy attempts to blend into the crowd for a sneak attack but is effortlessly found out by the Xingese Bellatrix's ability to sense the Homunculus' inhuman presence. In the tower, Lieutenant Hawkeye is battling with Gluttony's strength and apparent immortality, having fired several shots directly into his head with nearly no effect. But when her handgun ammunition runs out and the monster prepares to eat her alive, she is rescued by the timely interventions of her dog, Black Hayate. At that time, Master Sergeant Kain Fury tosses one of his pistols to Hawkeye and both officers opened fire on the enemy but the shots had no effect on Gluttony. When they surrender themselves to the fate, Colonel Mustang arrives in time for the rescue.

Colonel Mustang appears in the stairwell behind them and blasts Gluttony out the window with Flame Alchemy, sending him plummeting to the ground on top of Envy. Envy attempts to flee the scene by disguising as a dog but the plan cut short when he accidentally runs into Alphonse and Rin Yao and both are shocked to see the dog morph to human form when Lan Fan resumes her attack.

Colonel Mustang and 1st Lieutenant Hawkeye head to their car to rendezvous with 2nd Lieutenant Havoc who reports to them that Barry has already set out after his errant body. Alphonse appears on the scene as well and the four of them follow Number 66's trail, hoping that the fleeing assailant will lead them directly to the enemy stronghold. The Colonel catches up with Barry, who confirms that his soul will be able to track his body no matter where it goes. Alphonse informs the Colonel that he believes their enemies to be Homunculi, citing his encounter with Greed as evidence, but the Colonel is sceptical that such monsters can exist until Riza confirms Alphonse's claim by stating that Gluttony did not die even after being shot multiple times in his vital areas.

Their chase leads them to Central 3rd Alchemical Laboratory. The Colonel feels this gives them enough evidence to surmise that their enemy is linked directly to Central Command and orders everyone to pull back. Unfortunately, Barry enters the building to chase after his body without following the order. This creates an opportunity for the Colonel and his team with the excuse to pursue a fugitive and the backup is on the way. When the Colonel and Havoc reaches an abandoned laboratory, Lust appears and Havoc only then realises Lust is Solaris, his recent girlfriend.

Colonel Mustang asks Lust whether she knows Maes Hughes. When she confesses her regret of unable to kill Hughes by herself, the Colonel opens fire and forces her for further interrogation. She regenerates from the wound and admits that she is a Homunculus. She has a Philosopher's Stone at her core which powers her regeneration but when the Colonel calls her a monster, she states that her thoughts, emotions and physical makeup are identical to those of humans.

Before they can make their move, Lust knocks the Colonel's gun and also rupturing the water pipe which causes the Colonel unable to ignite his flame. They flee the room but the Colonel reveals that he has yet another trick up his sleeve; with the Transmutation Circle on the back of his glove and a cigarette lighter borrowed from Havoc, he transmutes the water filling the room into combustible hydrogen and flammable oxygen which he then ignites, incinerating Lust in a makeshift furnace. They try to cautiously re-enter the devastated room to investigate and warns Havoc to be on alert for Lust's regenerative abilities. Unfortunately, at that very moment, a shot goes through Havoc's abdomen and causing him to collapse.

Lust claims that there is no way to save Havoc. Colonel Mustang disagrees and plunges his hand into her chest and rips off the Philosopher's Stone. Lust's body crumbles to dust, but quickly reforms around the Philosopher's Stone in the Colonel's hand. She stabs the Colonel through the abdomen with her bladed fingers, reprimanding him for being so rude as to grope a lady's breast.

King Bradley arrives at the scene and decides to handle the situation by himself. Meanwhile, Colonel Mustang is seriously injured. Lust shreds his ignition cloth and proceeds to finish the remaining intruders. Barry found his body but the body is in a rotten state due to a different soul has been forced to fit into the body. This makes Alphonse start to doubt whether their goal can be accomplished without a failure.

At the same time, in town, Rin Yao and Lan Fan continue their relatively one-sided battle against Envy and Gluttony. Tired of the endless fighting, Rin Yao asks his opponents to surrender and promising them that no harm will be done to them. However, noticing that various onlookers have begun watching the spectacle, Envy orders Gluttony to devour both of them and the spectators. But as Envy begins to change form, forming strange scales on his body, a mysterious voice to which Envy refers as "Pride" echoes through the street and scolds Envy's carelessness at allowing Colonel Mustang's group to trespass their headquarters before ordering a retreat. Envy reluctantly obeys and Rin Yao allows them to leave without a fight although he admits it was a close call.

At the entrance to the Homunculi's lair, Lust angrily confronts Barry, Riza and Alphonse. Barry tells her that he never wants to work with her and he wishes to kill her to free himself from their pursue all these time. Lust couldn't believe that Alphonse appears with them and requiring her to kill two candidates for "Human Sacrifice" in one night is too much for her. Barry charges his blade recklessly forward to her but instantly destroyed by her claws. Lust is deciding whether to kill Alphonse first or send Hawkeye to join the Colonel. Hawkeye later only found out the meaning behind Lust's cryptic message and she immediately fires her shot continuously at Lust. She falls into tears her shots have had no effect on Lust. When Lust wants to kill Hawkeye, Alphonse shields Hawkeye and displays his new ability to transmute without a circle. Lust begins her attack and Hawkeye demands that Alphonse leave her to save himself but Alphonse refuses to do so.

Suddenly, Colonel Mustang appears in the hall and unleashes a torrent of flame upon Lust as Alphonse transmutes an earthen shield to protect Hawkeye and himself from the blast. Lust is shocked with his appearance and asks how the Colonel managed to avoid bleeding to death. He reveals that he had used flames to burn his wound in order to stop the bleeding. Colonel Mustang claims that he will continue killing her until she stays dead and fires off wave after wave of flames at Lust, pushing her Philosopher's Stone to exhaustion which causes her body and the Philosopher's Stone crumbles to dust. Then, Colonel Mustang collapses while thanking Alphonse for protecting Hawkeye and asking them to call an ambulance for Havoc. King Bradley eavesdrops on the scene, sheathes his sword and quietly walks away, ordering the officers at the entrance to call an ambulance.

Unnoticed by anyone, Barry the Chopper's soul remains intact, his blood rune undamaged on an immovable scrap of steel. But his dying body, further drawn to its soul, drags itself over to the wrecked suit and, against Barry's vehement protests, scratches the rune away and ends the transmutation. Both Barrys die simultaneously.

Winry waits for Alphonse's return at the outside of the hotel. She welcomes him back happily but at the same time worried about Alphonse's severe damage. However, as they celebrate together, Alphonse's left arm falls off entirely.

Meanwhile, Major Armstrong brings Edward to meet 2nd Lieutenant Breda and Mr Han, an immigration coordinator who will travel together with them to the East.

Alphonse and 1st Sergeant Kain Fury pay their visit to Colonel Mustang and 2nd Lieutenant Havoc at the hospital. Before they arrive at the room, they heard the Colonel is scolding Hawkeye of giving up herself after what Lust told her. He feels disappointed and never expects Hawkeye will give up so easily. He makes Hawkeye promise not to easily give up again. Beside his bed, Havoc is resting and claiming that the Colonel also acting blindly by walking to the battlefield. Havoc wishes the Colonel can be more careful when the Colonel tried to save him and now he has the burnt marks which will drive girls away from him. Both the Colonel and Havoc has been put together in the same room so that they can be easily protected from the enemy. 1st Sergeant Kain Fury has brought the map requested by Hawkeye. The map shows the rough estimate based on Hawkeye's number of steps to calculate the distance between the underground entrance and the large doors beneath the lab. When they are trying to analyse the map, they begin to suspect the Fuhrer although he was the one that called for the ambulance and also involved in wiping out Greed and his group. The Colonel also thought of what Hughes said to him about the danger of the military which involves the powerful higher-ups in the military. The Colonel determines to dig deeper but Havoc pulls out from the operation as he claims that he can't feel either of his legs.

Major Armstrong and Edward and the rest travel to the East through the desert. They exchange conversations about the tales of alchemy between the East and the West. As they go further, Edward is shocked when he sees 2nd Lieutenant Maria Ross.

In the meantime, while Pinako Rockbell is looking through the photo album at her home at Resembool, she has an unexpected guest, Hohenheim.

A flashback of the story of how Colonel Mustang working with his team to save 2nd Lieutenant Ross's life and uses his basic knowledge to transmute a burnt corpse. Everyone is discussing the recent events and decide to share all the information regarding the Homunculi. It is determined 2nd Lieutenant Ross has no choice but to leave Amestris and head to Xing for the purpose of her safety.

Before returning to Central, Edward wants to take another look at the Cselkcess ruins. A group of Ishvalans attempts to capture him but their leader disapproves their action. The leader, Mister Shan later realises that Edward knew the Rockbells. He reveals to Edward the details of their death at the hands of an unknown Ishvalan who had a distinctive tattoo on his right arm. The group and Edward then part ways with Edward returning to his friends.

The military group returns to Central but Edward makes a trip home to have his arm repaired. On the way back, he decides to stop by at Rockbells' graves but he sees Van Hohenheim, his father in front of his mother's grave.