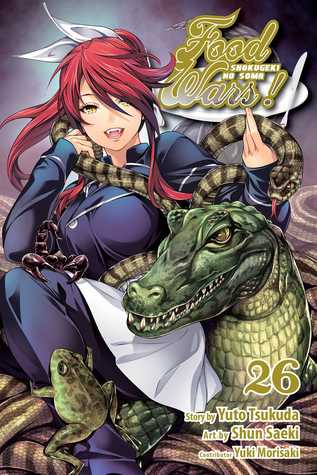 This volume continues with the second round of the battle between the Central and the Rebels (Food Wars!, Vol. 25: Shokugeki no Soma - How the Drop-Outs Live, Yuto Tsukuda, Shun Saeki & Yuki Morisaki). Terunori Kuga is so eager to battle against Eishi Tsukasa and Soma heard their conversation from behind the wall.

In the second round, Eishi Tsukasa will be cooking against Terunori Kuga for the first match. Neither of them specialised with the chosen theme ingredient, green tea. Tsukasa is specialised in French cuisine whereas Kuga is more in Szechuan cuisine. A flashback of the story reveals that Kuga was a former Elite Ten (8th seat) and he lost his first battle to Tsukasa who holds the 1st seat of the Elite Ten.

Meanwhile, Kobayashi Rindou will be battling against Tousuke Megishima. Their theme ingredient is chilli pepper. Rindou, the 2nd seat of Elite Ten, has an unusual ingredient for her dish. She is very confident of handling the alligator and to defeat Megishima. Rindou has the reputation of using rare ingredients in her dish and she travels around the world to explore other rare ingredients outside the country. Megishima who is a ramen master has started to cook his dish by preparing the chashu or roasted pork. When his friends are discussing his dish, he reveals to them that he will be cooking African ramen. Megishima doesn't like to participate in matches which is a surprise for Rindou when he accepts the invitation to join Soma's team. Megishima tells her that Soma's passion for cooking has changed his mind and a flashback of the story shows that he rejected Soma's invitation when Soma contacted him for the first time.

Megishima is well-known in the ramen world due to his kindness to help ramen stores from financial problems or any other difficulties. When he rejected Soma's invitation, Soma and Megumi went to meet him to convince him to join the Rebel team. Megishima is also famous of being a shokugeki hater. He doesn't like to cook to show off in public matches. The only battle he cares is his customer's satisfaction. Soma challenges Megishima if his cooking can surpass Megishima's ramen. Soma will never win due to the huge gap of their skills and experience but he won't give up. Besides of protecting his friends, another thing that Soma wants to save is the freedom in their creation. He believes that the world will be more fun if there are more people can make completely different dishes than himself. Soma passes out after that but Megishima admits the defeat and willing to enter the Regiment de Cuisine.

Kuga is very focused on preparing his dish to the extent that his friends start to concern whether he remembers that the green tea is required in the dish. Meanwhile, Tsukasa demonstrates his skills and in-depth knowledge of green tea. When everyone feels worried about Kuga, Kuga receives a jar of black liquid from his teammate, Subaru.

Saitou Soumei is cooking against Mimasaka Subaru with bluefin tuna as their theme ingredient. Soumei is a sushi chef and this will be a disadvantage for Subaru. However, Subaru has learned a new perfect trace flash technique which enables him to copy and trace his opponent in a more productive manner. Subaru creates a set of ten sushi which is almost the same as Soumei except one and that one piece of sushi will be the deciding factor.

This volume ends with all the contestants are keen to get their dishes to be tasted by the judges.

Edward, Alphonse, and Winry return to Central, where the Elric brothers intend…