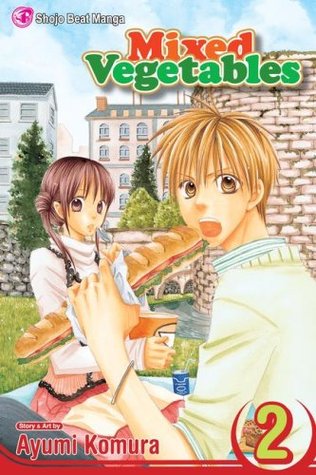 Ashitaba confesses to Hyuuga of her motive to date him is to become a sushi chef. After her confession, Hyuuga reveals that he has the same plan as her, thinking of using her to become a pastry chef in order to avoid to run his father's sushi restaurant. Both depart separately and Hyuuga feels that all his efforts are waste of time.

When it is the time for the baking test, Ashitaba who is responsible for the ingredients has made a mistake of ordering the wrong whipping cream. Ashitaba, Ichii, and Matsuyama are planning to tell their teacher for the mistake but Hyuuga refuses to join them. He feels the mistake is Ashitaba's fault of not checking the ingredients before making the order. Their teacher feels Hyuuga has no understanding of group work and he hits Hyuuga before he asks Hyuuga to get the correct ingredient. Matsuyama tells them that Hyuuga always acting differently for someone else's sake. Ashitaba recalls of what Hyuuga told her and wondering whether their relationship actually is not faded yet.

Ashitaba confronts Hyuuga and apologises for her action of deceiving him into the relationship. Hyuuga feels guilty of using her and prefers to be hated because he can't apologise for all the things that he did to her. However, Ashitaba prefers a positive approach, telling him that actually, both did the same thing and for that reason, they should forget the past and have a fresh start. Both promises not to involve each other in their dream again. Hyuuga encourages her to be a female sushi chef and she feels he will be a great pastry chef too. When Ashitaba thought that everything is back to normal, she still telling herself that her tears are probably because that they are back to the beginning instead of admitting or aware that actually, she has fallen in love with Hyuuga.

During the baking test, Hyuuga needs Ashitaba to teach him on how to bake a sponge cake. Despite he wants to become a pastry chef, he has never baked a sponge cake before because his house doesn't have an oven and also it's a weird thing to do for a sushi chef's son to bake a cake. Ichii and Ashitaba are making a genoise whereas Hyuuga and Matsuyama will be making chiffon cake. Ashitaba teaches him how to bake the cake and what are the differences between genoise and chiffon. The make-up exam is just an excuse from their teacher and they realise they've forgotten something that is more important than their dream, which is their teacher's birthday.

Ashitaba and Hyuuga feel they are comrades in a similar battle and they want to help each other to realise their dreams, respectively. Hyuuga finally has the chance to visit Ashitaba Patisserie. Then, he only knows that Ashitaba has a younger brother, Natsume. Hyuuga feels disappointed because Natsume can be the one who takes over the bakery shop. However, Ashitaba insists that Natsume will not take over the bakery shop because he will become a professional baseball player in the future due to his exceptional talent in the sport. If she tells her parents that she doesn't want to take over the bakery shop, she worried that the parents will put their hope on Natsume and his talent will be wasted because of that.

Ashitaba misses the sweet omelette which she had when she went to a sushi restaurant for the first time. Unfortunately, the shop has closed down. This made her misses the omelette more. She has been trying to re-create the omelette but it's never the same as what she had. She looks so depressed and struggling with her dilemma between her dream and family business. Seeing her in such state, Hyuuga tries to re-create the omelette to find back the nostalgic flavour. He created different flavours of omelette but none of them suits Ashitaba until he cooks the omelette using his family's recipe. Hyuuga immediately brings her to his family restaurant. When she meets Hyuuga's father, it reminds her of the sushi chef who has been her inspiration all these time.

This volume has an interesting development. It has more involvement in friendship and also working together towards their dreams. It was a great ending for this volume because you don't know what happens until you read the next volume and trust me, you really have to read it.