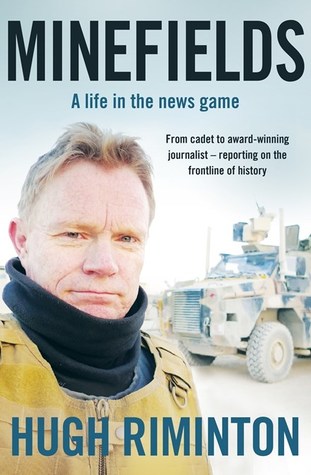 I got to know a lot of history from this book. I didn't know there was such a controversial history between New Zealander and South African rugby team in 1981 Springbok tour. My most favourite story from this book is the 1987 Fiji coup. It's difficult to believe such a dramatic incident happened to Fiji before. Fiji is always renowned with picturesque landscapes, but behind those beautiful views lie such a tragic history.

The story begins with the author's childhood memories, but the part that fascinated me the most was how he started his journalism career. The feeling is strange when you see someone reading or reporting news on TV almost every night and then, you read about his autobiography, and you suddenly have even more of respect on him after knowing what he experienced, and also his seriousness and passion in his work. Imagine that you are watching a newsreader on TV every night, probably a routine thing that you do every day and you never have any serious thought about the person's background or experience. He or she is just someone who reads the news to you every day. And then one day, you get the chance to know the person and suddenly you just "Wow! Are both the same person?" You just can't believe both are the same person, the one that you watch every night on TV and the one who shared his tremendous journalism experience in the book.

When I was reading the part about John Mac who has a brother called Deng, I was wondering whether the person that he mentioned was the same person who wrote a book about his life as a child soldier and later became a criminal lawyer in Sydney. So much of coincidences. Towards the end of that story, it confirms that was the same Deng who has inspired a lot of people. I am so eager to read his book. It has been in my reading list since the released of the book. I never get the chance yet because the book is a very popular book in my local library, but I will continue to wait.

Another reason that I loved this book, which is, the story also included some of his carelessness or mistakes in his job instead of portraying himself as a superhero or perfect human being. The story is not only realistic, but it's also compelling to read.

This autobiography deserves applause and award.

Rating: ★★★★★
More reviews can be found on Goodreads: Minefields: A Life in the News Game.

Tokyo on Foot: Travels in the City's Most Colorful Neighborhoods, Florent Chavouet

Edward's father, Van Hohenheim and a few other people are in a…