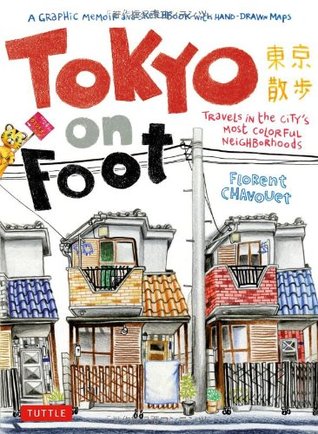 This is a lovely art book hand drawn by a French artist who went to Japan for six months when his girlfriend interned there. I really loved the art and thanks to the artist for showing me the power of colour pencils. It inspires me. I'm considering whether I should draw some random stuff or places around my living area or learn to draw with colour pencils.

Unfortunately, not many people enjoyed the book, or probably they have different expectations on this book. For me, I treat it as an art book by an artist who expresses his experience in Japan using colour pencils and other drawing tools. That is my simple thinking, and I don't have any complicated expectations other than that. I enjoyed the book, loved the hand-drawn art, appreciate the artist's effort, and I'm glad that I have such a simple mind of viewing this book. And I feel happy that this book won an award as well.

I feel lucky that this book was published in 2011 and not in recent years. Judging by the people's mindset of the current world, I doubt this book will be able to get released and probably get debated in social media. Seriously, what's wrong with the current world? I really never feel any offence, or racism exists in this book. How can people get such an idea? It reminds me of a comic artist who recently been criticised as racist when he drew an African American woman based on her skin colour. During the interview, he was quite speechless and said that he doesn't know any other methods on how to draw an African American person differently if that was not the way. Sometimes, I'm worried that there will be no more artists, authors or creative people in the future because they don't dare to express their ideas anymore. Even if they do, it's no longer their original ideas because people are getting more sensitive nowadays.

I felt ridiculous that someone using this book for her project to understand Westerners' views about Japan in a history class. Then, the artist got criticised as being chauvinist and racist just because he drew fat women and transvestites and the person felt offended about the descriptions about them and also some random men. The entire review was full of rage and even asking people not to buy the book, and the reviewer recommended other books better than this. This is so sickening. Firstly, who will use an art book for project research? Art or comic books are mostly based on artists' imaginations, and most of them are just for casual reading.  This book is more suitable for someone who loves art or Japan. As stated on the front cover of the book, this is "a graphic memoir sketchbook with hand-drawn maps". I wonder how serious the person puts his or her effort in doing the research by going through comics and illustrations instead of reading a real book. The ironic part is if this is as offensive as he or she felt, this book will not be awarded as the winner of the Ptolemy Prize at the 2009 International Festival of Geography.

Everyone has different opinions about everything. Sometimes, you really need to think deeper or analyse them before jumping into conclusion. With a massive number of people expressing contradict views about everything in different social media, sometimes you just feel lost in this overwhelming noise and you no longer able to differentiate what is right or wrong. To be honest, I really couldn't find the existence of chauvinism and racism in this book. When I filtered the reviews with poor ratings for this book, nobody mentioned about racism or sexism or whatsoever. Other readers are more concerned about other areas instead of heading to a different direction. It's kind of sad that such a beautiful art book is being treated in a different manner which shouldn't be.

Rating: ★★★★★
More reviews can be found on Goodreads: Tokyo on Foot: Travels in the City's Most Colorful Neighborhoods.

I See You, Clare Mackintosh

Minefields: A Life in the News Game, Hugh Riminton

I got to know a lot of history from this book. I…