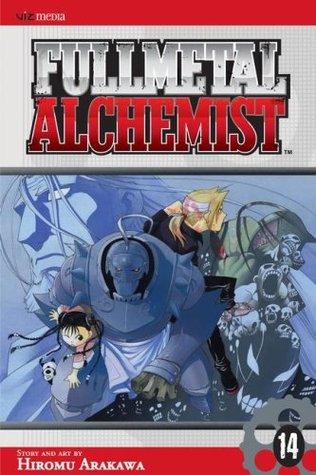 After coming out from Gluttony's stomach, Edward sees his father in front of him. The Elric brothers are surprised that he doesn't know them and only realise he is not their father, but he knows who is Hoheinheim. The Homunculus's boss is surprised that Hohenheim has children and also mumbling that Hohenheim is still alive. Then, when he sees the Elric brothers are injured, he heals them.

Rin Yao despises him since he is the Homunculus's boss and at the same time, the Father orders Gluttony to eat Rin Yao since a human has no use for him. After the Elric brothers know that he is the boss, although he has healed them, they want to fight against the source of evil.

The Elric brothers trying to use their alchemy but it doesn't work. The Father changes his plan for Rin Yao. Instead of killing him, he wants to create a human-based Homunculus by pouring Greed's Philosopher's Stone into Rin Yao's blood. He will be the replacement for Greed.

To gain the power to become the future Emperor, Rin Yao is willing to accept Greed into his body. A new Homunculus is born. At that time, Scar and Mei Chan appears, and she reunites with Xiao Mei. When Scar tells her which one is Edward, she feels disappointed with his appearance. Edward reveals to Scar that the Ishbal war was started by Envy who disguised as a military officer and shot the innocent child. Scar demands answer and fight against Envy.

Gluttony is targeting on Mei Chan and wants to eat her but immediately rescued by Alphonse. Alphonse won't be able to escape as there is a horde of chimeras in front of him and the worst thing is he can't use the alchemy. Leaving him not much options, he has to ask Scar to bring Mei Chan and Xiao Mei to a safer place although this means he has to let Scar go. Unfortunately, Scar has no intention to leave the surface. Without Alphonse's knowledge, Scar uses his metal head to hit one of the pipes to create a dust explosion so that he can run away from Envy.

At the same time, Rin Yao fights with Edward which ends up the Elric brothers are being captured and brought to the Wrath by the Homunculi.

Gluttony has used up the regenerative powers of the stone. The Father takes out the stone from Gluttony's body to recreate him with all the memories intact.

The story switches to the Elric brothers where Edward reveals about Alphonse's body while he's taking shower. Then, Alphonse tells him that he hides Mei Chan and Xiao Mei inside his armour body. The Elric brothers are brought to the Wrath or King Bradley. At the room, they meet Colonel Mustang and tells them about the changes of his subordinates' whereabouts as well as the conspiracy which involves more than just a portion of the military high command. Edward returns the badge and wants to quit as a State Alchemist as he doesn't want to get involved with the State Alchemist program which is to select human sacrifices.

Unfortunately, he got blackmailed by the Fuhrer. Edward has to take back his words and continue to become a State Alchemist to protect Winry. In exchange, Alphonse makes a request of allowing them to continue to do their research to recover their bodies. The Fuhrer approves the request as long as they don't interfere with the military's plan. Colonel Mustang has no other choices as well but to remain at the current position.

Before they leave the room, Colonel Mustang asks the Fuhrer whether he was the one who killed Hughes. The Fuhrer denies that he is the killer and refuses to tell who is the real killer. Also, the Fuhrer thrusts his sword to Alphonse's body, but luckily, it misses both Mei Chan and Xiao Mei. After leaving the room, the Elric brothers ask the Colonel for Dr Knox's address and also some money. They quickly leave the place and promise to report to the Colonel later. Meanwhile, Colonel Mustang is worried about Riza's safety and relieved that she is alright after knowing that Major Armstrong is just helping Riza to watch for the post for temporarily.

After the Elric brothers made a call to Winry and knew that she is safe, Rin Yao or Greed appears from behind. Greed tells them that Rin Yao wanted them to pass a handwritten cloth to Ran Fan. At Dr Knox's house, Mei Chan is being diagnosed with mild concussion and the Elric brothers hand the cloth to Ran Fan. After reading the message that Rin Yao has the Philosopher's Stone, Ran Fan is relieved that her clan is safe but starts to worry when Rin Yao is not with the Elric brothers. They remain silent after she keeps questioning them for Rin Yao's whereabouts.

In the meantime, Colonel Mustang, Major Armstrong and Lieutenant Hawkeye are discussing the current situation in the car. Major Armstrong reveals that he feels ashamed since the day he disobeyed the order to fight in the Ishbal war as he couldn't bear to see the death of innocent lives. He promised himself that he won't leave the troop again. When he asks what will the Colonel do at such stage, the Colonel feels being tested by the Fuhrer and feels like a real human when he fights with a real monster.

Ran Fan feels upset that the prince, Rin Yao willingly to accept Greed into his body and she couldn't protect him. She insists on getting an automail arm although Alphonse had advised her that it will take a very long time to get recovered. When Alphonse is leaving the room, he sees Mei Chan is listening to their conversation and in a sudden, she throws a dart towards Ran Fan but able to dodge it. She introduces herself as 17th royal princess of the Chan Clan. Despite both are still in the recovery state, the battle soon begins between Mei Chan and Ran Fan to protect their clan respectively. Alphonse tries to stop them but being scolded of interfering their country's affair until Dr Knox comes and shouts at them of not taking their rest. Later when Alphonse is helping Dr Knox to clean up the house, Dr Knox reveals that he is separated from the family. After he came back from the Ishbal war, he experienced trauma and almost killed his wife on the bed as he was mistaken his wife as an enemy when she tries to wake him up.

Scar wandering around at the top of the Homunculi Lair until he reaches Dr Marcoh's cell. When he comes down to the room, Dr Marcoh recognises him as Scar who kills all the State Alchemists. He reveals that he is the creator of the Philosopher's Stone which has ruined the Ishbalans. He doesn't want to join the Homunculus, but if he rejects to join them, the entire village will be destroyed. So, if he gets killed by an intruder, the whole village will be saved, and his captor's plan will be delayed too. He begs Scar to kill him.

Edward wakes up from the sleep and realises it's dark outside. He wants to go to Dr Knox's house but it's quite late. So, he changes his plan and wants to return Riza's gun back to her. He makes a phone call to the Central Headquarter but she isn't there. He asks 2nd Lieutenant Breda for Riza's home address. The story ends with Edward reaches Riza's doorstep and tells her that he comes to return her gun. Riza is taking her shower at that time. When she is going to put on her clothes, there is a tattoo with burn scars on her back.

The business hours are from midnight to around 7 in the morning.…