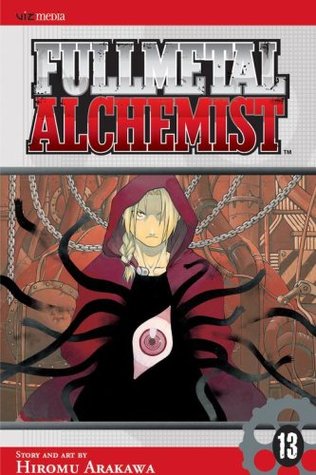 This leads to a battle between Rin Yao and Envy. Envy's arm turns into a blade and a snake, and it wraps around Rin Yao. Rin Yao drops his sword but able to blindside his enemy by kicking sand into her eyes. He quickly grabs Envy's blade arm and uses it to slice the snake arm wrapped around his body.

The Elric brothers continue to fight with Gluttony and Edward transmutes a deep well to trap him. However, Gluttony uses his stretching ability and able to escape from the well. Envy transforms herself into Ran Fan to distract Rin Yao which creates an opportunity for Gluttony to swallow him. Edward tries to save Rin Yao from being consumed by Gluttony, and at the same time, Envy tries to save Edward( a precious Human Sacrifice) from being swallowed as well. In the end, Gluttony consumes all three of them and returns to his original form after realising his mistake. Alphonse cries out to Gluttony to bring his brother back.

Meanwhile, Ran Fan is staying at Dr Knox's house for a full recovery. The story switches to Colonel Mustang and Riza Hawkeye are attempting to find out who their allies are in the military. While the Colonel is trying to figure out his next move to overthrow the Fuhrer, he is approached by General Raven. They talk about his transfer and exchange a few gossips which include that the Fuhrer is a Homunculus. This leads to General Raven brings him into a meeting with some of the higher-ups in the military, including the President himself.

Edward wakes up in a dark room and finds out that he is still alive. He remembers that he, Rin Yao and Envy were swallowed by Gluttony. The foul stench seems like the smell of blood. He wanders around and keeps shouting for any replies until he calls the 'idiot prince' which receives a response from Rin Yao. Rin Yao appears with a torch, but Edward has a doubt whether he is the result from Envy's transformation until he suggests to recite the service menu from the hotel that they were staying. Rin Yao tells Edward that he made the torch using human bone and the open flame. The open flame probably comes from the flame attack which swallowed by Gluttony before that. They are exploring around and wondering whether they are really inside Gluttony's stomach. Edward found Alphonse's hand while walking around the place. There isn't an exit door exists there, but Edward determines to get out from that place and try to make a door or a hole. The ground is more like surrounding with clotted blood. They throw a torch into the hole, but no echo from that throw and they plan to keep walking to reach the edge.

In the city, Mei Chan is looking for Xiao Mei and explains how Xiao Mei has been with her since she was young. Mei Chan comes all the way from Xing is to gain the secret of immortality to impress the Emperor so that she can protect her clan. When Scar hears the story, he decides to go and find Xiao Mei to repay Mei Chan who has saved him before this. Mei Chan follows him to look for Xiao Mei and asks for his name which he prefers to keep it from her.

Edward fires the gun given by Riza, but there aren't any echoes from any directions. Rin Yao gives up of walking due to starvation. Edward tries to encourage him, but it has no use on him. Instead of leaving him alone, Edward carries him on the shoulder and falls on the circular stone in exhaustion. Edward remembers leather goods are edible as he takes off his boot. He creates a boiling pot to boil the leather shoe and purify the blood into drinking water. Rin Yao apologises to Edward for dragging him into this.

When they have enough of rest and want to continue their walk, Rin Yao senses something is coming and finds out that the new presence is Envy. Edward sells himself out to get the exit information from Envy, but unfortunately, Envy tells them that the place has no exit. Envy also reminds him about the area, and Edward realises that this is the portal of truth. Gluttony is an artificial portal of truth created by Father, a result of a failed experiment. There is no exit to leave, and their lives will end when they are out of strength.

Envy reveals that she was the one who shot an Ishbalan child which caused the outbreak of the Ishbal war. After bragging her achievement of being the one who started the civil war, Edward now knows that his hometown was destroyed, Ishbalans became refugees, Scar became revengeful, and the death of Winry's parents was caused by her. Envy in response transforms into her true form, a grotesque monster filled with the lost souls of those who had been consumed by her.

Alphonse is not sure what to do next, and Gluttony mentions that Father would be angry with him, leading Alphonse to realise that the Homunculus has a father. Once Alphonse fights his internal struggle of whether or not Edward is still alive, he quickly asks Gluttony to take him to his Father.

Meanwhile, Colonel Mustang is in a tense situation and asks the Fuhrer when the military has been bowing its head to Homunculi. The Fuhrer tells him that Homunculi has been in control since the birth of this nation. The Fuhrer couldn't understand why everyone is upset with the death of a soldier since a soldier should be prepared to face such ending once he is in uniform. He fills with anger when he saw Hughes's child in despair during Hughes's funeral. The Colonel asks him what if his son finds out the truth of him, but he tells the Colonel that his son will never be his weak point.

Master Sergeant Fuery receives a communique from Personal Affairs Bureau. He tells the news to Riza that he will be transferred to South Headquarter. Second Lieutenant Breda is assigned to West Headquarter, and Warrant Officer Falman is transferred to North. While Sergeant Fuery is breaking the news to her, Riza receives an order from Personal Affairs Bureau that she will be assigned to Central City Headquarter as the President's personal secretary.

In a different scene, Mei Chan finds out Xiao Mei's whereabouts and she wants to confront Alphonse who she believes is the one who has kidnapped Xiao Mei. However, her next move stops by Scar because Gluttony is with Alphonse at that time. Although Scar advises her to be careful, she insists on entering the Homunculi's Lair to rescue Xiao Mei.

The story shifts to Edward and Rin Yao battling with Envy's true form. Edward creates a weapon for both of them to fight against the monster. There is a mixture of lost souls, asking to be killed but also asking for help. Edward feels confused and hesitates to kill, but Rin Yao reassures him that the monster is just playing tricks on him. Edward's hesitation leads him being injured by the monster and Rin Yao tries to wake him up. In the midst of chaos, Edward sees the Philosopher's Stone on Envy's core. His broken left arm makes him even harder to reach the stone although the monster is very close to him. Edward ends up at Envy's mouth whereas Rin Yao seems finds out the exit, but he needs Envy's help.

Scar and Mei Chan enters the Homunculi's Lair and battle with the chimeras. After various fights, they finally meet the guardian of the lair, the Father.

King Bradley remembers that he was being abandoned and sold by his parents. They were kept as "presidential candidate" and being trained with various skills. Then, each of them will enter a different stage and become the subject of an experiment. He was injected with the Philosopher's Stone which contains the energy of countless souls. The body tries to reject the powerful substance while the stone attempts to take over its new host. Every candidate that they tested before him died with bodies torn apart from within. His body was endlessly destroyed and regenerated by the Philosopher's Stone. Either he gives up, or the body conquers the stone. He was a success of a new type of human being. He was promised with wealth, family, property and friends and was given the name 'King Bradley' since he has been chosen as the leader of the country. Colonel Mustang suggests to King Bradley of living as a normal human being but he is proud as a Homunculus who has superior power, same as a human is proud being as human.

In the meantime, Gluttony brings Alphonse to meet the Father. When Alphonse sees the Father, he recognises the Father is his own biological father.

Edward wonders whether a human transmutation such as transmuting himself will open the portal. He will open the portal and they will jump through it, but if he fails, there will be a rebound and deflect back to the initiator. Edward asks Envy about the symbol which appears in a mural that he saw at Cselksess. Edward wonders whether the Father has turned the entire Cselksess population into Philosopher's Stone and he will recreate the destruction in this country but Envy will not tell the truth until she gets out of the place. All the lost souls on Envy's body are Cselksess citizens. They will never return to their bodies and will be absorbed as energy.

Edward creates the portal and both of them jump in. He ends up in two portals and sees Alphonse's body, but the body can't go back with Edward because his soul doesn't belong to Edward. He promises the body that he will return and get the body back for Alphonse.

While Alphonse is facing his father, a sudden explosion occurs on Gluttony and Envy comes out from Gluttony's stomach. Rin Yao and Edward are also able to return to the real world as well. Edward reunites with his brother and tries to comfort his brother who worried about him. When Edward is still trying to figure out where he is, he realises his father, Hohenheim is in front of him.

After coming out from Gluttony's stomach, Edward sees his father in front…

When Hyuuga returns to home from France, he tells Ashitaba about her…