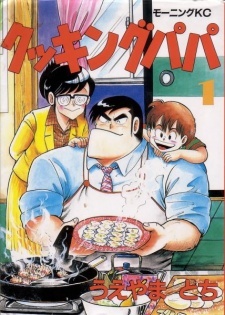 Kazumi Araiwa is a model employee in a large enterprise but becomes an entirely different character at home. He is very keen on cooking and often cooks delicious dishes for his son and wife, who is frequently occupied by her work as a journalist.

Kazumi works as a Sales Manager. He is very responsible with his job and strict to his team. When lunchtime arrives, he eats his home-cooked meals but interrupted by the managing director who has a tempura donburi delivered from a famous restaurant, but he wants to trade with Kazumi's homemade bento.

He is being portrayed as a very masculine and stern at work. However, when he reaches home, he becomes a different person when he sees his 7-year-old son, Makoto Araiwa. The first dish that he cooks in the story is Italian Casserole which consists layers of pizza cheese, bacon, peppers, cabbage, potatoes and onions.

The wife Nijiko Araiwa who works as a reporter comes home, and Kazumi needs to return to the office to work. Although Kazumi has a busy day, he prepares the dough before he goes to bed so he can make udon tomorrow morning.

The next day, Kazumi needs to work overtime. He calls his wife to go home early and asks her to try to prepare dinner for their son. During lunchtime, Kazumi is trying to make ice-cream at work, but unfortunately, an office lady is having her lunch in the office. Kazumi needs to hide what he's doing and insists on having lunch together instead. Meanwhile, the managing director is disappointed that he comes late for the lunchbox trade even he has cut short his golf game.

Since Kazumi is living just five minutes away from the office, he sneaks out from his team during overtime. When he returns home, he realises that his wife is in chaos when trying to prepare for the dinner. He cooks a 5-minute Araiwa-style Vegetable Mix Rice and then back to the office. When he arrives in the office, he goes to the kitchen and scoops out the ice-cream that he prepared during lunch time but without his knowledge, his colleague finds out his secret. Then, he claims that he bought the ice-cream from somewhere and served them to his team. Everyone loves it, but he couldn't answer the shop's name when they asked where they can get the ice-cream.

Kazumi gives his lunchbox to the managing director after receiving a last minute call from a client, Mr Takeda who asks him to have lunch together. After knowing Mr Takeda is living alone, Kazumi invites him to his house for dinner which coincidentally, his son is having a party with his friends at home.

When Kazumi reveals that they will have curry for dinner, it reminds Mr Takeda of his wife who cooked curry and only focused what their children want. He is considering to leave, but after trying the curry and rice, Mr Takeda loves it so much and asks for the second plate.

Miss Kimura has fainted at work, and Kazumi suspects that it's light anemia. He insists Miss Kimura see a doctor and goes home after that. Since he is going to meet a client, he drives Miss Kimura to the doctor. In the car, Miss Kimura tells him she's on a new diet, and she skips breakfast.

After work, Kazumi and another two colleagues go to Miss Kimura's house to check on her. The doctor agreed that Miss Kimura had light anemia. While Miss Kimura is talking to the colleagues, Kazumi leaves a tray of egg toast with a note 'Bake for 5 minutes'. Miss Kimura loves the toast and keeps the note in a safe place. In the end, she gives a tie to Kazumi as an appreciation for his caring.

Kazumi's wife calls him to tell him that she will only return tomorrow night due to her work to cover a fishing trip. She promised to get a striped beakfish for tomorrow's dinner. With the striped beakfish caught by Nijiko, Kazumi makes beakfish sashimi. As for the guts and skins of the fish, he soaked them in the vinegar.

Kazumi and his family are having gyoza at Ippinkan which is famous for handmade gyoza. The owner's wife will give birth soon.

After the baby is born, Kazumi goes to the shop to give their gift for the new baby. The shop is so busy and overloads with customers. The owner tells him that he only close the shop on the day that the baby was born and he can't afford to do it again. He wishes to see his wife and the baby at the hospital but the visiting hours are clashing with his working hours.

Kazumi offers to help at the shop and rejects the invitation to hang out with his colleagues. When his team comes to the shop, he wears a face mask to hide his identity, but Miss Kimura recognised his injured thumb. She waits for Kazumi after work to confirm her suspicion, and Kazumi asks her to keep this as a secret.

As Hajime discussing his weight and the difficulty to get a girlfriend, the overweight managing director is wondering whether it's true that there isn't any food that he can eat without getting fatter. He asks Kazumi and later brings him to aerobic class and points his chubby wife to Kazumi. He then reveals that his wife has been doing aerobics for three months and also has been on a diet by eating many vegetables and fruits but she is not losing any weight. He feels sorry for her and hopes Kazumi's wife can help her since Kazumi often has great homemade food for lunch.

The next day, Kazumi cooks a pot of healthy food which consists of mushrooms, oysters, and some garnishes as well. He gives the pot to the managing director although he is not sure whether the wife will like it or not. Oysters and shellfish don't have many calories, and seaweed and mushrooms have no calories. Kazumi also gives him a notebook which fills with some recipes and ideas.

One month later, the managing director and his wife appear at the 30th-anniversary party. The wife has lost a lot of weight. They express their gratitude towards Kazumi's wife although Nijiko has no idea what is going on.

Today is Kanamaru Corporation's athletics event. It's a competition between factory and sales teams. Kazumi teams up with Kimura in a three-legged race and wins the first place.

During the lunch break, Kazumi brings his homemade sushi and eat with his family. The managing director tried one of them but still assuming that Nijiko made the lunch. When their son tries to reveal that Kazumi is the one who made the rolls, Kazumi tries to stop him.

Hajime is trying to win back his reputation in front of Midori after his loss in the morning, but after he won the race, Midori didn't see it as she is spending time with her boyfriend. The next day, everyone except Kazumi is experiencing body sore due to the intensive workout on the day before.

Kazumi is going to Tokyo by train to attend the Tokyo Trade Fair. After the discussion with the team at Tokyo branch about what to display at the Tokyo Trade Fair, Kazumi borrows their kitchen to cook ramen for them. In previous visits, he brought Hakata gameni and spicy mentai to them. They love his food and assume that he brought the ramen all the way from Hakata.

Hajime comes to work and still experiencing a hangover. He has been drinking every night after being dumped from his girlfriend. The next day, one of their colleagues is getting married. He drinks a lot during the wedding and also during the after party.

Kazumi asks Kimura to make sure that Hajime makes it to the taxi stand. Unfortunately, Kimura is a bit drunk. When Hajime expresses his love to Kimura, Kimura thinks of Kazumi and runs away, leaving him on the street. Seeing Hajime in such bad condition, Kazumi takes him home and also prepared a pot of rice soup. On the next morning, Hajime couldn't remember what happened last night and assumes that Kimura brought him home and cooked the rice soup for him.

Nijiko is going for a work trip and only return the day after tomorrow. Makato is not feeling well after running in the rain, and Kazumi has a presentation to get it done on that day. He is worried about Makato's condition, but the presentation is important and leads to a discussion which only finished after 8 pm. Luckily, Makato is feeling better after taking the cold medicine. Kazumi makes a steam apple for Makato. He is getting better, and the fever slightly went down. Unfortunately, Kazumi catches a cold, and both of them need to rest under the blanket.

It's Kazumi's birthday. As usual, Nijiko is busy with work and Kazumi will be spending his birthday with Makato. He cooks Araiwa's style Bacon which he has prepared and put into the fridge for four or five days.

When they are having their meals, his colleagues come to celebrate his birthday with cake and wine. The couple from Ippinkan comes with gyoza to thank him for his help but only realise it's Kazumi's birthday. The wife comes back with shochu, and it turns into a party.

Rating: ★★★★★
More reviews can be found on Goodreads: Cooking Papa #1.

This volume begins with a flashback of Colonel Mustang asks his mentor,…

The business hours are from midnight to around 7 in the morning.…