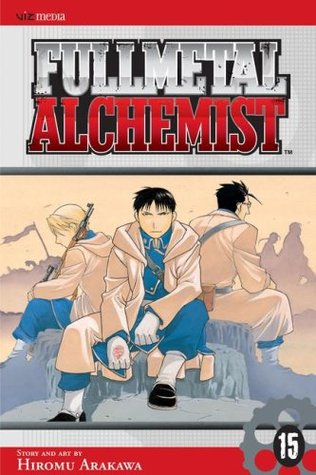 This volume begins with a flashback of Colonel Mustang asks his mentor, Lieutenant Riza Hawkeye's father to teach him more about alchemy so he can have more knowledge to take the state qualification and also to increase his power to strengthen the military to protect the nation. However, his mentor is not interested for the state qualification and the fund for his research as he already satisfied with his perfect work. Then, he commits suicide and tells him that he can find the secret of his research from his daughter and asks him to take care of her.

When Edward comes to Riza's place to return her gun, he tells her that he couldn't shoot although he has prepared himself since he joined the military. He even tells her that Scar is Winry's enemy and how he doesn't want Winry to fire the gun to kill Scar.

Edward wants to know more about the Ishbal war. Riza tells him that she was stationed there during her final year at the military academy.

The story shifts to a series of flashback which begins with the conversation between Scar and his brother. Scar's brother was so interested in studying alchemy especially the alchemy of Xing, Rentanjutsu but Scar wanted him to give up as he felt learning alchemy is going against the God Ishvara.

Meanwhile, Winry's parents were helping to cure the injured Ishbalan despite being criticised as hypocrite since the war has killed and wounded a lot of Ishbal people by the Amestrian. Medicine was in shortage. Winry's parents are advised to leave the place as soon as possible as the whole area will be burned down soon. However, Winry's father insisted on staying since there were so many poor and injured Ishbalan that he wanted to treat.

The higher-ups in the military are discussing about the country of Aerugo has been providing weapons to the Ishbalans in the war. In order to end this war as soon as possible, the first step is to lock all Ishbalan soldiers up. President King Bradley signed the "Presidential Decree #306", which means any Ishbalan soldiers would be stripped of their conscription in the State Military and imprisoned as traitors. State Alchemists with combat suited abilities would be sent into the front lines of the Ishbal Civil War to act as human weapons in a campaign to exterminate the people of Ishbal.

Ishbalans were being sacrificed to create the Philosopher's Stone. The Ishbalans continue to fight against the military and try to protect the children and women to leave the city. Unfortunately, a wall was built in front of them. Major Armstrong couldn't withhold his conscience and broke the barrier. He asked the Ishbalans to escape through the hole and do not stand against national military.

At the meantime, Colonel Mustang ignites the fire and burns the entire place. Later, the Colonel (Major at that time) reunited with Hughes. They discussed about the current situation, the country's future and both didn't understand why the war needs to wipe out every Ishbalans despite the place has no commercial value. While they were talking about Hughes's letter from his lover, an injured Ishbalan tried to attack them from behind but killed by Riza who was working as a sniper at that time. When they returned to the camp, they saw Riza and Mustang felt awful after what happened to his mentor, Riza's father.

The story shifts to Dr Marcoh presented the Philosopher's Stone to the military high ups, and one of them was Major Kimberly, the crimson alchemist. When Dr Marcoh left the place, he felt guilty of what he had done. Dr Knox who was sitting outside at that time and saw him. During their introduction, they heard screams. Dr Knox told him that the building is conducting human experiments by gathering data on the effects of burns and pains on a human body using Ishbalans. There are doctors who follow the authority to kill people, but at the same time, there are doctors still trying to save and treat the Ishbalans. Both of them felt confused and guilty. In the end, Dr Knox asked Dr Marcoh why he's killing people when he's a doctor?

Meanwhile, during the research, Scar's brother felt that there was something not right about the country's alchemy.

Riza and Mustang were paying respect to Riza's father in front of his grave. Riza has no other family members, and Mustang asked her to visit him in the military authorities if she needs any help. Although Riza revealed to Mustang that her father did left behind his secret research, but she never revealed the location.

In the meantime, a heated discussion occurred between the military and Major Kimberly. Mustang, Riza and Armstrong were unwilling to fight in this battle which has killed a lot of innocent lives, but Major Kimberly reminded them that they should get themselves prepared with any given task once they are wearing the military uniform. Major Armstrong couldn't take it anymore. A substitute State Alchemist was called. Basque Grand, the Iron Blood Alchemist, has arrived and wanted to become the forerunner in the battle.

Hughes was requested to go to the West district. During the battle, Hughes has lost some of his soldiers. Suddenly, a surrender flag appeared and the leader of the Ishbala religion, Roug Roa made a request to talk to King Bradley. He wanted to exchange his life with the living Ishbalans and ended the war with his life. Although Roug Roa surrendered himself, Brigadier General Fessler insists to kill every Ishbalan. However, Colonel Grand shot him, and everyone acted as it was a stray bullet hit him. Colonel Grand took command, replacing Brigadier-General Fessler. When Hughes took Roug Roa to King Bradley, unfortunately, King Bradley wasn't interested with the negotiation, and also won't stop the annihilation.

Meanwhile, Ishbalans were seeking for asylum in Aerugo. However, they closed their door from Ishbalans although they provided the Ishbalans weapons to fight against Amestris. The military found out that Winry's parents were saving Ishbalans at the Kanda district.

Scar asked his brother to leave his research as the national military is getting closer. When he wanted to leave, other Ishbalans asked him to stop and telling him that his brother's research might save Ishbalans by retaliating the military with alchemy which probably with a power that could surpass power. Then, an explosion appeared nearby which signifies the national military has begun their attack. Major Kimberly was so proud with his alchemy work in destroying the place. Scar attacked the military and able to escape, worrying about his family's safety. When he and his family were making plans where to run, Major Kimberly was standing at a building's rooftop. He destroyed the place using his alchemy. Scar's brother is injured but tried to save Scar who has lost his right arm. He brought Scar to Dr Rockbell, and he gave his arm to Scar. When Scar woke up, he recognised it was his brother's arm. He was devastated with the loss of his family and full of hatred against Amestrians and State Alchemist and killed Winry's parents. When the military arrived, they found the Rockbells already died.

All areas of Ishbal are under control of the national alchemy. The soldiers celebrate their victory. They thanked Mustang, and for them, he is their hero. His flame has saved them and killed the enemies. Despite the victory, Mustang felt unsatisfied that he can only protect a small amount of people. Hughes pointed out that human's strength is limited and if he wants to protect the country, he needs to be at the very top of that progression. King Bradley realised Mustang is the only one there who wasn't engrossed into the victory.

The military higher-ups asked Major Kimberly to return the Philosopher's Stone, but he tossed the stone into his mouth and killed them using alchemy.

After buried an innocent Ishbalan child, Riza asked Mustang to burn her back which contains the secret research so that it won't create another flame alchemist. She wanted to become herself and to end the bond with her father and the alchemy. Despite the brutal Ishbal war, Riza decided to choose her path to work in the military and Mustang chose her to become his aide that can protect his back and also has the right to kill him if he steps off of the path.

In the meantime, Scar swore to survive to take revenge for his lost land and family.