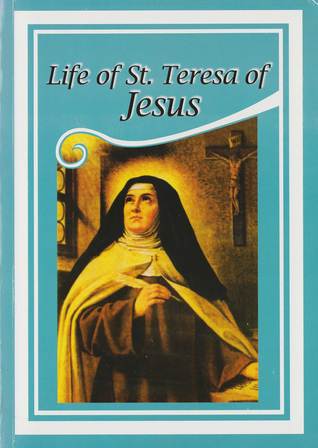 Saint Teresa began her story about her religious parents and how she loves to read because of her mother. When she was young, she used to dwell on gossips with her friends and other earthly things. Later, she was sent by her father to the monastery to be educated.

She wasn't like the place, but when she was treated well by other nuns, she started to change.

"Although at that time I had the greatest possible aversion from becoming a nun, I was very pleased to see nuns who were so good; for in that house they were all very good -- completely blameless in their lives, devoted to their Rule and prudent in their behaviour."

As she fears for her sins will lead her to Hell afterlife, she was reluctant to become a nun but forces herself to accept it as she believes that is the best path to enter Heaven.

"I began to fear that, if I had died of my illness, I should have gone to hell; and though, even then, I could not incline my will to being a nun, I saw that this was the best and safest state, and so, little by little, I determined to force myself to embrace it."

When one of the nuns passed away due to illness, other nuns feared for the death, but she prayed that she will experience some illnesses from God because she felt envied with the nun's patience during the sickness.

"I begged God to send me any illness He pleased if only He would make me as patient as she. I do not think I was in the least afraid of being ill, for I was so anxious to win eternal blessings that I was resolved to win them by any means whatsoever."

Shortly after becoming a nun, Teresa experienced a severe illness, which left her in great pain for an extended period. At one point it was feared that her illness was so severe that she would not be able to recover. When she had a seizure, other people were so sure she was dead. She learned that they had dug a grave for her after she woke up four days later. Afterwards, she was paralysed for three years and was never fully recovered. When she felt there was an improvement with the movement of her hands and knees, she praised God.

"All this I bore with great resignation, and, except at the beginning, with great joy; for none of it could compare with the pains and torments which I had suffered at first. I was quite resigned to the will of God, even if He had left me in this condition forever."

Later, she told the story of how she went astray and too ashamed to return to God and to approach Him in the intimate friendship which comes from prayer.

"The devil, under the guise of humility, now led me into the greatest of all possible errors. Seeing that I was so utterly lost, I began to be afraid to pray."

When she confessed her sin to a priest, the priest urged her not to stop praying. She showed her appreciation for God's forgiveness and advised us about the benefits of prayers.

She had unusual visions and wisdom thoughts to respect and love God in a uniquely different manner. She was courageous and also a very high self-conscious person. She feared God, but at the same time, she wanted to be likened by others which caused her easily distracted by earthly things. From time to time, she carefully examined her conscience and immediately confessed her sins to God every time she found something evil within herself.

The entire book was very philosophical. I have to admit that I do not entirely understand what I'd read. It's a great book where you probably need to read every sentence several times to get the meaning behind it. My most favourite part of the story was the reformation of the Discalced Carmelites. One of the most valuable lessons that we can learn from her is her humility which allows herself to surrender and become completely immersed in divine love. This is the most challenging book I ever read so far in my life but one thing for sure, this book is worth to read more than once and need to read more than once to gain a deeper understanding of her words.

From all this God delivered me, in such a way that, even against my own will, He seems to have contrived that I should not be lost.

Though I stayed here for only a few days, such was the impression made on my heart by the words of God, both read and heard, and the excellence of my uncle's company, that I began to understand the truth, which I had learned as a child, that all things are nothing, and that the world is vanity and will soon pass away.

for by now I was concerned chiefly with the good of my soul and cared nothing for my comfort.

So if I were a person who had to advise others, I would never recommend anyone, when a good inspiration comes to him again and again, to hesitate to put it into practice because of fear; for, if one lives a life of detachment for God's sake alone, there is no reason to be afraid that things will turn out amiss, since He is all-powerful. May He be blessed forever.

I had light enough to realize how trivial is the value of all things that pass away and how great are the blessings which can be gained by despising them, for the blessings are eternal.

one must never do the smallest thing that is wrong in order to do good, however great.

I never spoke ill of anyone in the slightest degree, for my usual practice was to avoid all evil-speaking. I used to remind myself that I must not say anything about anyone which I should not like to be said of me. I was extremely particular about observing this rule on all possible occasions.

The whole trouble lay in my not cutting off the occasions of sin at the root.

It did me great harm not to know that it was possible to see in other ways than with the eyes of the body. It was the devil who encouraged me in this ignorance and made me think that anything else was impossible. He led me to believe that I had imagined it all, and that it might have been the work of the devil, and other things of that kind. I always had an idea that it was not due to my fancy but came from God. However, just because the vision did not please me, I concealed it from myself and I did not dare not to discuss it with anyone.

And even despite illness, or other hindrances, we can still engage in true prayer, when there is love in the soul, by offering up that very impediment, remembering Him for Whom we suffer it and being resigned to it and to a thousand other things which may happen to us. It is here that love comes in; for we are not necessarily praying when we are alone, nor need we refrain from praying when we are not.

You chastised my faults with great favours. In the condition I was in at that time, it was much more painful for me, when I had fallen into grievous faults, to be given favours, than to be given punishments. A single one of these favours, I feel sure, troubled and confounded and distressed me more than many sicknesses and many other grievous trials put together.

But when I find myself receiving new favours, after making so poor a return for those which I have received already, I experience a kind of torture which is terrible to me, as I think it must be to all who have any knowledge or love of God.

Charity grows when it is communicated to others and results in a thousand blessings.

I believe that anyone, however strong, who humbles himself and trusts not in himself but in someone who has experience, will lose nothing.

We must seek new strength with which to serve Him, and try not to be ungrateful, for that is the condition on which the Lord bestows His jewels. Unless we make good use of His treasures, and of the high estate to which He brings us, He will take these treasures back from us, and we shall be poorer than before, and His Majesty will give the jewels to some other person who can display them to advantage to his own profit and to that of others.

We are so miserable and so much attracted by earthly things that we do not have the courage necessary for doing great things.

Rating: ★★★★
More reviews can be found on Goodreads: The Life of St. Theresa of Jesus.

The story begins with Norman Bates, a 40-year-old man falls asleep on…