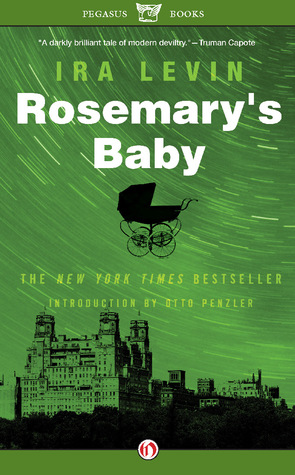 Rosemary and her husband Guy doesn't mind to break their recently signed lease of a five-bedroom apartment so that they can rent a four-room apartment located at the Bramford. Rosemary is even more excited when the previous tenant's son willingly to sell most of the furniture from the apartment at a low price.

Hutch had told them beforehand about the dark history of their living area, but they are convinced that everything is fine with the place. After a few weeks, when one of the residents Terry who is living with Mr and Mrs Castevet had committed suicide, Rosemary recalls what Hutch told them, but Guy reassures that everything is alright.

Mr and Mrs Castevet invite them for dinner at their house, thanking them for saying something nice about their kindness of taking care of Terry. Surprisingly, Guy loves hearing Mr Castevet's theatre stories, and Guy visits him the next day for more stories but later comes home in an upset manner. Meanwhile, Rosemary receives a charm necklace from Mrs Castevet as a present, but the smell of the charm is diffusing throughout the house.

Rosemary is finally pregnant, and Mrs Castevet suggests to Rosemary to go to her friend, who is one of the most excellent obstetricians in the country. Rosemary is delighted to accept the offer. Mrs Castevet comes with a herbal drink, and Rosemary drinks it without hesitation. After all, that is part of Dr Sapirstein's advice for the daily vitamin drink.

Hutch pays her a visit and shocked with Rosemary's appearance and the drastic weight loss. Coincidentally, Mr Castevet drops by, and they have a chat. Rosemary mentions about tannis root, which piqued Hutch's interest to research about it. At night, Hutch gives her a call and plans to meet her tomorrow morning without revealing many details. However, Hutch doesn't turn up, and later Rosemary learns from his friend that he is in a coma when a maid finds him unconscious on the floor that morning. At the same time, after hearing the bad news, Mrs Castevet coincidentally appears, claiming she is doing her Christmas shopping around that area. Since Rosemary is still feeling unwell, Mrs Castevet hails a taxi, and they return home. Of course, she will stand by her side to ensure that Rosemary is drinking her vitamin drink.

This classic deserves its fame. Sometimes, I wonder how someone can have such a brilliant idea during the 60s, and there are not many horror stories at the current age, which can be as fascinating as the classic ones. The suspense was successfully built from the beginning until the ending of the story. I can't wait to watch the movie.

The Case Against William, Mark Gimenez

William Tucker, number twelve, was the senior quarterback for the Texas Longhorns.…

This story focuses on Sally, who grows up in a convent after…