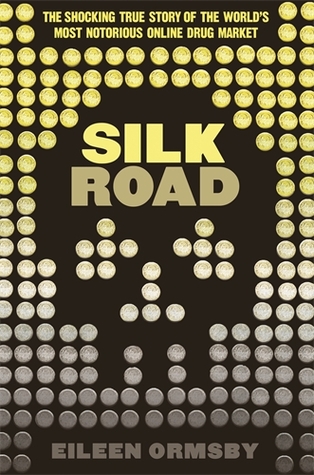 Silk Road still can be a controversial topic to be discussed among ourselves. From an IT person's perspective, I'm curious about the website, especially it's architecture and the framework design, but I know that I won't dare to visit the site.

They built their utopia of drugs. Although I feel it is an illegal business at the same time, I couldn't bother with the existence of the site. Everyone has their choice of what they want to do in their life.

This book provides comprehensive information about Silk Road and also Bitcoins. Although I was an IT person, I never had any knowledge in those areas although I wish to know more about the darknet. But I don't have the courage, and I don't want to get a knock on the door by the police.

I was expecting the story will only focus on the founder, but it's more of a biography of Silk Road itself. Although the drug dealers donated some money to the charities, I still feel it's wrong to earn money in such an illegal method. They came out with a lot of moral philosophy to support their actions. It sounds like a warm community sharing the same interest and helping each other, and even have guides about drug safety and advice about drug abuse, but the entire site operating illegally by selling illicit drugs which in the end still harm others.

However, another part of me telling myself that everyone has their choice on how to live their life and they already prepared with the consequences of their actions. This world is operating based on supply and demand.

Things are getting out of hands when the operation is getting larger and attracted more scammers. I don't feel surprised when the drug utopia was affected by hackers and scammers. Humans born with the urge of doing bad things and the existence of the Silk Road is due to greed. It's too good to be true.

Sometimes, I wondered how many users read or understand what the Dread Pirate Robert said to them. He came out with too many philosophies. Isn't their primary purpose is to obtain the drugs that they bought and earn profits after selling them? Do they care about those philosophies? Maybe the founder enjoyed his creation and being admired for bringing such masterpiece into the world. But I doubt all users were sharing the same belief with him. They just want to get drugs and money. And at that stage, Silk Road is the best thing that ever created to cater to their needs.

I enjoyed reading this book because it consists of remarkably detailed research from the author. It was a great effort that she was able to explain such a complicated operation more straightforwardly to make it easier to understand. This book is one of the most mind-blowing books that I have ever read. The author did an excellent job in her writing. This book consists of thorough research, simplified version of Silk Road's complexity, and the author able to maintain a neutral perspective throughout the entire book.

Rating: ★★★★★
More reviews can be found on Goodreads: Silk Road by Eileen Ormsby.

She is Thursday and also Seth's Thursday wife. The first wife is…

One-Sentence Summary: A woman who is trying to sell holidays on the…