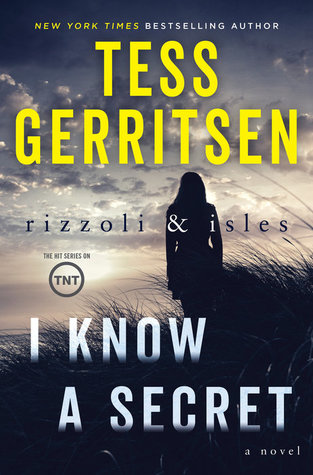 Cassandra had her eyeballs removed postmortem and the eyeballs placed in her open palm. She was found dead by her father in her apartment. The father suffers a heart attack and still in a coma in the hospital. Maura couldn't find the victim's cause of death.

The next victim, Timothy, was found dead on a pier on Christmas Eve. Maura needs to find the cause of his death. Timothy was shot with three arrows but already dead when one of the arrows pierced his chest. They find out both victims have a common denominator, which is alcohol. They drank alcoholic drinks before they died.

Maura finds there is symbolism for each death, but she needs confirmation, and this leads her to contact Daniel for help. It seems each murder bears resemblance with several martyr saints. When one of the saints on the glass windows in the church is Saint Maura, does this indicates Maura will be the next target?

Oh, man! I feel annoyed and strongly dislike Maura's relationship with Daniel. It was a perfect closure on the previous book. Why brings it back again? I really hate that part of the story, and the worst part is Maura seems proud of her courage to choose this path although she seems tortured with the decision before this.

I'm happy for Angela finally able to stand up for herself. I guess I can understand her Catholic guilt, but at the same time, I feel bad when she was under-appreciated and Frank gives her the same old treatment. I'm alright with the development for most of everyone's relationship in this story except Maura. I know some readers feel this is a romantic relationship and support her courage to strive for her happiness, but I really can't surpass my guilt. It's a bit difficult for me to accept it. Why not someone else or remains single? Why thrust the readers to have someone to be with her? Someone that is not supposed to.

I wonder whether the author's feeling is reflected in her story. I don't know why I feel everyone seems grumpy in the story. Jane seems angry with Frost's reuniting with his ex-wife and Maura's relationship with her mother. She was angry with her mother, Angela, when her mother chose to go back to her father. I wonder whether this will be the last book in this series because of the existence of clarities in several relationships and I don't know why I feel the author seems "grumpy" and wants to end this series. Maybe she is not; it's just me feeling that although I don't know why. Also, I sense some changes of style the way the author told the story.

However, I can't deny the author's brilliance with the idea of saints and murders matching birthdates. Miscarriage of justice is always an interesting reading to me but is something which I hate and painful to hear in the real world.

Rating: ★★★
More reviews can be found on Goodreads: I Know a Secret (Rizzoli & Isles #12) by Tess Gerritsen.

Lockwood family just moved into their new home at 25 The Avenue.…

The Couple Next Door, Shari Lapena

One-Sentence Summary: Family members trying to get more money to save their…