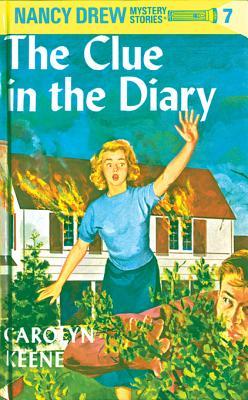 Nancy and her best friends, George and Bess, are returning from a country carnival when they see the burning of a country mansion. They rush to the rescue, but Nancy finds an anonymous diary when seeking shelter from the flying debris. The journal is hard to decipher with the illegible handwriting, technical drawings and chemical formulas.

The destructive explosion appears to be an act of revenge. And all the evidence are against the inventor Joe Swenson who is swindled by the mansion's owner, Felix Raybolt.

It's always feel good to read Nancy Drew stories once in a while after too much heavy reading. I enjoyed the straightforwardness without too many additional descriptions about the settings. I miss the humanity, innocence and kindness where nobody blames anyone if anything goes wrong. I liked the simplicity of words, putting the target audience as the highest priority instead of the author's ability of word usage. I miss the literature of the old days, not only the stories but the drawings as well.

This story has the most emotions and dramas comparing to other previous stories. Nancy feels blushed when she sees Ned, going to a dance party after asked by Ned, more teases and wittiness from her friends, and even slapped by a woman. There is a mere reflection of the real world which reduces the static of the characters and creates an imperfection world to the readers. This story is more adventurous, and I feel it's the best that I've read so far.

Rating: ★★★★ (4/5)
More reviews can be found on Goodreads: The Clue in the Diary (Nancy Drew Mystery Stories #7) by Carolyn Keene.