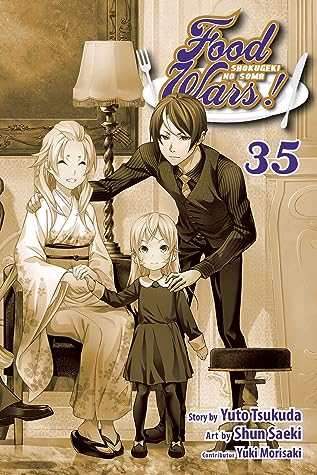 Meanwhile, Megumi declares war against Saiba to protect Erina. Before she faces Saiba, she has to defeat another dark chef or Saiba's subordinate to proceed to the next match. To prevent Saiba to win the competition which leads to the marriage with Erina, Soma has to defeat Saiba first.

On the day of the battle against Soma, the undefeated Saiba uses Joichiro's (Soma's father's) knife which given to him five years ago as a farewell gift. In this battle, the Bookmaster has set the theme, which is to condense the five influential cuisines into one dish within 180 minutes. The five cuisines are Chinese, Indian, Italian, French and Turkish. Soma is keen to use his own knife to surpass his father's skill after Saiba reveals that he will be using Joichiro's knife in the competition. Saiba's power relies on crossing knives which he had taken from other chefs that had lost to him in the past.

Still not a fan for the cross knives skill and the revelation of Bookmaster is unexpected but not surprised. I guess my interest in this story is getting lesser as it goes by. Luckily, the next volume is the final volume else I don't know how long I can bear to see more damage added into this story.

This final volume begins with the story of Erina's parents, especially Erina's…