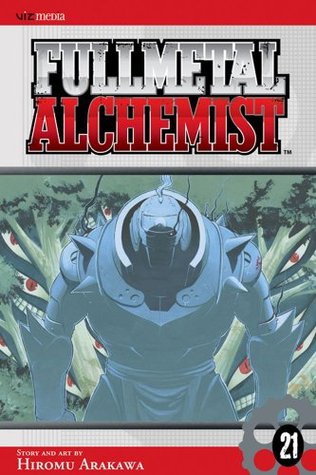 A train from Fort Briggs arrives in Resembool, where Major Miles asks to borrow some of the town's water. Two soldiers deliver a large water container to the Rockbell house. Winry comes out from the water container and goes upstairs to change her clothes. She is shocked to find Ed is hiding there with Greed or Ling, Darius and Heinkel. After a series of chaos from both sides, Ed asks if Winry knows Al's whereabouts and she tells him that Al is heading to Central City from Briggs via the train.

Winry informs Ed about Hohenheim is staying at a slum outside of Central called Kanama and also mention about the Promised Day. Ed suggests Winry should flee the country with Den and Pinako. This angers Winry of Ed of not having the confidence to defend the country but asking his loved ones to escape. Ed's group departs on that night and asks Winry to bake him an apple pie for his return after he finishes the mission.

In Reole, Dr Marcoh, Scar, Zampano, Gerso and Yoki are heading together to Central City. On the way, Zampano muses over the irony of the mixed group and Scar expresses his intention is more to change the Amestris' behaviour towards Ishbalans, not to protect the country. Scar's master and his party of a large group of Ishbalans who shares the same ideology decide to join them as well.

In the East area, Lieutenant General Grumman greets Major Miles and the Northern troops. They have finally arrived for the joint training exercise with the Eastern forces. Miles secretly informs Grumman that everything has been well-prepared. But Grumman mentions that a problem has arisen and indicates to a nearby watchtower where the Fuhrer himself has arrived to oversee the exercise.

In Central City, Al awakes inside the train, having just recovered from another tug-of-war in his body. After hearing a noise outside, he goes to investigate and find Gluttony is there. Worried that he will not be able to fight, Al tries to run away but is stopped by Pride, who binds Al with his shadowy tendrils. Al attempts to fight back, but the strain causes him to blackout again.

Colonel Roy Mustang visits Major General Olivier Armstrong in the Armstrong family mansion. Olivier informs Roy that she will leave the house to him instead of her brother Major Alex Armstrong if anything happens to her. In gratitude and as congratulations for becoming the new head of the Armstrong family, Roy offers a bouquet of flowers with a secret note hidden inside which reveals the true identity of Selim Bradley. After receiving the message, she tosses the bouquet into a nearby fire pit to destroy the evidence.

Back in the East, the joint training has begun with King Bradley keeping his eye on all goings-on. Miles is informed by one of his men that Al has gone missing. Meanwhile, Bradley's men are greeted by Major General Hakuro and tell the Fuhrer that the training is a diversion to lure the Fuhrer out of the capital. The Ishbalan terrorists, Grumman and Mustang, are working together to take control of Central Command. After hearing his men informing that the number of Ishbalan refugees has increased around Central City, Bradley decides to return to the capital. When they are on their way back to Central, their train is blocked by a flock of sheep. Their train car is abandoned on a bridge and destroyed by high explosives. A unit of East Area soldiers informs Grumman by radio that their assassination mission has been completed and they are going to Central to assist Colonel Mustang. Grumman tells Major General Hakuro that he has been played.

In Central, Riza Hawkeye regroups with 2nd Lieutenant Breda and Sergeant Major Fury in preparation for their role in the coming battle. At the same time, the Generals in Central Command are panic over the news about the Fuhrer's state. Major General Oliver Armstrong is considering herself to take control but forced to stand down as Father appears with Sloth, reminding his pawns that he is still among them.

Ed's group has arrived in Kanama and brought to Hohenheim. Ed quickly punches him with his automail arm, and Hohenheim notices Greed's unusual tattoo. Hohenheim tells them the entire story and Ed is shocked. Since he is the Philosopher's Stone that they wanted, he asks them to use him. Ed rejects the idea due to the sacrifices of innocent humans. Ed is reluctant to work together with Hohenheim to stop the Father's plan on the Promised Day. Before he leaves with the group, he states the message from Pinako regarding Trisha's last words which is, she couldn't keep her promise, and she is dying first. Ed watches Hohenheim cries uncontrollably before he goes to have food with his group.

As they are on their way to the next destination, Al suddenly appears. Ed is excited to see him and trying to engage a conversation with him. Ling tells Ed not to go near him as he can sense Pride. Pride is surprised that Greed has defected from their side and believes his soul is too weak, allowing Ling to take over. As Ed watches the shadows with eyes which appeared from Al's armour, Greed identifies it as the Homunculus Pride, who is his oldest brother. Pride wants to eliminate Greed, and Ed thinks he is impersonating Al, but Pride reveals he is actually possessing Al's hollow body. Ed is confident that the Homunculus cannot kill him but Pride eager to tear off Ed's limbs. Pride threatens Ed with Greed's life as well as the lives at Kanama. Ed uses a transmutation to create a blackout in Kanama to cut off the light and weaken Pride's shadow powers but also decreases Ed's vision.

Greed analyses the situation with Heinkel and Darius, suspecting that Pride's real body is somewhere close by due to the original shadows are coming from the bushes instead of Al's body. Heinkel, in his chimera form, uses his animal sense to track and attacks Pride's human body, Selim Bradley. Greed wonders how Pride can track them down, and Darius helps them dodge an attack when he senses Gluttony. This reveals how they were tracked down because Gluttony uses his sense of smell to see.

As Greed evaluates the difficulty of the situation, Ling suggests switching with him due to his ability to sense the Homunculus. Ling can sense Gluttony and tricks him by letting him get close. An angry Gluttony is transforming his body into its true form. But before he is entirely transformed to attack, Lan Fan rushes out from behind the bushes and using a metallic arm with a sharp blade, slices up Gluttony's body. Ling is happy when he sees Lan Fan, who has returned with an automail left arm.

At the crash site, Lieutenant General Grumman and Major Miles are discussing the crash and the Fuhrer's body is still missing from the train wreckage. Grumman decides he'll gather the northern forces and search to confirm that Bradley is dead.

Meanwhile, at Madam Christmas' bar, she supplies Colonel Mustang with photos which prove that Selim Bradley is not human. The photos were taken 20 to 50 years ago, each with a different government high ranking people. She also states that none of the townspeople from the Fuhrer's hometown has seen him despite official records stating that he was born and raised there, and even the listing address is fake. Outside Madam Christmas' bar, government agents are waiting for Colonel Mustang to come. When another agent arrives and reveals her real name, and is Roy's adoptive mother, they attempt to enter, but an explosion occurs and destroys the bar. The two had escaped into the sewers, and Roy promises that he will buy a new one for her. After Madam Christmas leaves, Mustang walks from the sewers into an abandoned mineshaft where 2nd Lieutenant Breda, Sergeant Fury, and Lieutenant Hawkeye are waiting for him.

At Central Command, one of the Generals reveals to Father that Mustang has met up with his former subordinates and begun to take actions. Father asks what Mustang will do next since they know Mustang more than him. Major General Oliver Armstrong suggests that he would kidnap Mrs Bradley, but Father states it is unlikely as she is useless as a hostage. At the same time, Mustang's group already has Mrs Bradley in their car after taking down her bodyguards.

Lan Fan cuts up Gluttony repeatedly with her automail arm while Ling repeatedly punches him. While the two keep attacking Gluttony, Fu tells them about the Dragon's Pulse in Prince Xing. Dragon's Pulse, which is mastered by the emperor of Xing, enables them to see at night, and the members of the royal family have it as well. Once Ed realises Fu is there, Fu reveals that they have been hiding out in Central City. They come here to investigate once they detected several significant energy sources moving to here.

Ed is concerned with Lan Fan's new automail arm but gets caught in part of the explosion from a bomb that she released. Fu explains they are well-equipped with explosives and Ed asks Fu for help in dealing with Pride. As the lights turn on again, they have to rush to help Heinkel to deal with Pride. When two townspeople from the town arrive with a lantern, thinking that a monster is trying to kill a child, Pride uses this distraction by knocking the lantern out of one the townspeople's hands to start a forest fire to create more light. Before Pride can finish off Heinkel, Ed arrives and blocks the attack with his automail arm.

When Pride attempts to take control of Al's armour to fight with Ed, Ed signals for Fu to use a flash grenade to break apart Pride's shadow to save Al. After having Darius pulls Al away when Pride's shadow disappears, Ed assures Darius that Pride is no longer in control of Al's body. After Gluttony tells Pride what has happened to him, Pride knows that both the Xingese possess the ability to sense the energy. Once Gluttony mentions he has been killed a lot of times, Pride decides to kill Gluttony and devours him with his shadow, inheriting both Glutton's Philosopher's Stone and his strong sense of smell. By doing that, Pride can sense that Hohenheim is nearby as he is with Al and Darius.

As the story gets complicated, I have to read other sources to understand the story. And I feel bad using the sources without quoting them. My intention of jotting down this story into this blog is to remind me of the story if I need to remember it again. But please note that the sources are based on TV series, and I hope they don't feel I'm copying them. I had tweaked the storyline based on the manga and also tried my best to use my own words, but due to the complexity of the story and the number of characters, the source is really helpful for me.

Al wakes up and sees his father, Hohenheim. It takes some time…

At Fort Briggs, the invading Drachma army is being overpowered by Brigg's…