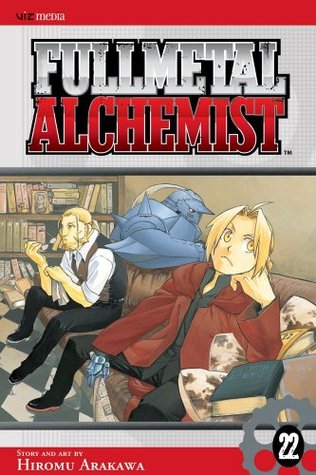 Al wakes up and sees his father, Hohenheim. It takes some time that Al realises he was possessed by Pride. Hohenheim admits that the Homunculi are supposed to be clones of his clone, which is why they can easily to take control of Al since they are sharing the same blood.

Fu arrives with the wounded Heinkel and tells them that Pride has devoured Gluttony while Ed and Greed are fighting him. Fu suggests for new tactics and mentions that all his flash bombs have been used up. Al has a plan and asks for his father’s help.

With the fire burning rapidly in the forest, this gives an advantage to Pride as lesser things are obstructing his view. When he decides to go after Greed, Hohenheim arrives. Hohenheim admits that he cannot defeat Pride. And as Pride ponders what will be his strategy, he retracts his shadows back to him. Al attacks from behind, only to be caught by Pride’s shadows. Pride feels this will be easier for him to possess Al again, which causes the overconfident Pride to let off his guard. Using a powerful transmutation, Hohenheim manipulates the nearby soil to pull itself up and create a giant dome where all light is cut off. Ed is angry with Hohenheim but only realises that the strategy comes from Al.

Inside the dome, Al reveals that his hollow body can survive without food or oxygen. In contrast, Pride cannot use his powers while trapped with him. Al also states that he intends to stay with him until The Promised Day is over. Due to the difficulty of defeating Pride, Hohenheim tells Ed that all they can do is to trap Pride together with Al. This prevents any damages to Kanama, and Ed will object the plan if they tell him about it. Elsewhere, Greed is evaluating the situation and reveals to Ling of his intention to conquer and take over the country since the other siblings are either trapped or no longer alive.

In Central, a group of homeless men talk about the Ishbalan’s movements when Scar, Dr Marcoh, Yoki, Zampano, and Jerso show up. The group learns that May is still in the city and the Fuhrer was involved in a train crash. They continue with their journey to Kanama and reunite with Ed’s group.

The commando team of Central soldiers receive their orders to shoot everyone in Colonel’s squad except Colonel Mustang. Mrs Bradley learns that she is also one of the sacrifices. She wonders if her husband has been betrayed by the State Military or she has been betrayed by him. Colonel Mustang gives his assurance that she will be safe and hope she will clear their name after everything settles. Although Mustang’s team has the Hero of Ishbal and “Hawk’s Eye” on their side, the team has managed to injure up to sixty enemy soldiers without taking a single life. The commando feels humiliated after knowing that he is being played.

At a different place, Captain Buccaneer tells the Briggs soldiers that are under his command that the time finally comes to leave the underground storage and begin their battle at the Central City headquarter. At the Central Command, Major General Olivier wonders which squad will be stronger. And she asks Lieutenant General Gardner whether her men that can go up against a Mountain Briggs grizzly bear or his Mannequin Soldiers. The soldiers in town are overwhelmed by the ruthless force of the Briggs Mountain Guard which has suddenly appeared out of nowhere right in the middle of town.

Colonel Mustang tells his men that the Briggs soldiers had been hiding inside the Armstrong family mansion where they smuggled under cover of the mansion’s renovation supplies. Richard and Charlie inform him of the low ammunition. Central soldiers realise that Colonel’s group probably is running low on ammo, they prepare to go for a final push but run down by a large ice-cream van. 2nd Lieutenant Rebecca Catalina reveals the abundance of new weapons and ammunition, including Xingese tear gas grenades filled with extra red chilli powder. Colonel Mustang also greeted by 2nd Lieutenant Maria Ross when he is inspecting the cabin. They manage to break away from the Central soldiers and flee toward the centre of town. Colonel Mustang expresses his disbelief at seeing Ross and the supplies. Ross makes a phone call and puts him in touch with the responsible person. Jean Havoc reveals himself, explaining that he is running a covert weapon trade from his family’s general store. He assures them that he can offer them any kind of support whenever they need anything.

At Kanama, Lan Fan tells Ed’s party that smoke and the faint sound of sirens have begun at the distant capital. Ed remarks that the time has come for them to make their move. Hohenheim explains to them if they can destroy the container, Father will most likely die, and all the countless souls of Xerxes’ citizens that are trapped inside him will be freed. Scar suggests that they head to the underground via the tunnel. Although they need to fight with powerful chimeras which are guarding it, their present strength should be able to handle them.

In Central Command, Major General Olivier kills a few generals including Gardner, taking the other general as a hostage. In town, Major Alex Armstrong has been assigned to secure the areas of the recent fight and explain the situation to Sergeant Denny Brosch. Fu who is hiding among the civilian spectators, overhears another soldier informing the Major about the incident in the Central Command. Fu remarks that things are happening quicker than anticipated and stresses the importance of finding Ling as soon as possible, wondering what Greed’s plan is. But Fu is having trouble to track Greed’s presence as the massive flow of energy beneath the city has overshadowed his presence.

In the Homunculi’s lair, Father spreads out his influence over a greater area and locks on the sound of Pride tapping on Al’s helmet.

Since the entrance to the underground blocked by soldiers, Ed and his group head to the alternate entrance at Laboratory 3. After tricking the guards, they divide into two groups, with Ed going with Scar, Darius, Jerso and Zampano while Hohenheim and Lan Fan go to a different direction. Hohenheim tells Lan Fan that she can leave and find her prince, as he knows that the prince is important to her.

In the Central Command chamber, one of the Generals is impatient to settle the rebellions. Against the scientist’s warning that their tests aren’t completed, the general activates the Mannequin Soldiers to deal with the Mustang’s group and Armstrong’s forces. As he prepares to give his order, he got killed, and his body chomped on by the Mannequin Soldiers.

Ed confirms that the location is the entryway to Father’s lair. When Ed tries to open the door, the Mannequin Soldiers emerge from it.

Back at Al’s location, Heinkel hears the sound from the dome and learns from Al that Pride is playing with his helmet. After a while, Heinkel realises that those sounds are actually Morse codes and orders Al to stop Pride from giving away their location. Unfortunately, it is too late when Kimblee appears from behind and launches his attack to open a hole in the dome. Al moves in to help Heinkel but is bound by Pride’s shadows. Al uses alchemy to create a smokescreen and sacrifices the feet from his armour to get away. Heinkel asks Al to leave him behind to save himself, but Al continues to help him. Then, Heinkel recalls that he has a small Philosopher’s Stone which he picked up at the mines in Baschool. Outside the dust cloud, Pride states that Al and Heinkel won’t be able to move, but Al emerges with his repaired feet and armour.

At the underground Central, May with Envy in the jar is running through the sewers with the Mannequin Soldiers in pursuit. May accuses Envy of lying to her, but she denies it. Once they catch up, May fights them, but Envy is free from the jar when the jar slips from May. Envy takes control of its body and digest the other soldiers, restores Envy to his transformed state.

Ed’s group is fighting against the Mannequins. Scar points out they cannot let these things get outside after Ed uses the alchemy to block the exit so that they won’t be able to run away. However, they still need to get past them to reach the Father’s lair. At the same time, Hohenheim finally meets the Father. And Father tells him that once Hohenheim gave his part to him, but this time, Hohenheim will become a part of him.

A train from Fort Briggs arrives in Resembool, where Major Miles asks…