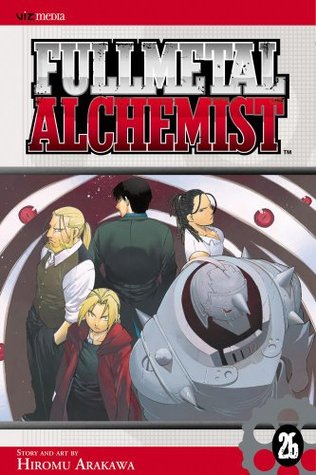 Ed sends Al to help May while he takes care of Pride. Ed deflects Pride's shadowy tendrils with his automail arm. Pride scoffs at Ed's arrogance and remarking that he only has experience in fighting opponents larger than him but rebuked by Ed. Ed responses that his own experience has given him the understanding of how small people fight and Ed grabs Pride's face and headbutt on him. This breaks off a chunk of Pride's deteriorating visage.

Al arrives in time to shield May and ask her to conserve her strength while he handles Father. As Izumi tries to assist Al in his assault on Father, however, the Homunculus leader declares that the ritual time has come. He captures all the four sacrifices with his own shadowy tendrils, pinning them down on the ground in a circle around himself.

Inside Central Command, Klemin notices the sun has almost entirely obstructed by the moon. He begs the Briggs soldiers to free him and get him to the centre of the Nationwide Transmutation Circle before everyone is sucked in. As Father keeps on talking and telling the human sacrifices that they will open the Gate for him to acquire the unlimited power, Greed suddenly appears from the shadow and revealing his intention to take the world.

However, the Father remarks that he already expected for Greed to appear at this stage. Dragging the five Sacrifices into a new circle around him, Father declares that the exact centre is right where he is standing. As he activates it, the eye of the Gate appears on each of the Five Sacrifices, and the black film expands to the surrounding area. The energy activates the circle made up of the five alchemical laboratories surrounding Central Command and then races around the nationwide circle. All the people within Amestris' borders collapse where they stand, and their souls pulled forcibly from their bodies. Then, Father appears in a gigantic size of a shadowy body, emerges from a pair of Gate doors. He calls out to the eclipsed sun, which he refers to it as "God". Father proclaims that he will drag God down to Earth and make it a part of himself. Then, a massive light breaks across the surface of the planet. The entire country of Amestris is deathly silent, and every one of its inhabitants falls lifeless. However, the five Human Sacrifices greeted by Father, who is now resembling Hohenheim as a young man, remarks that he has absorbed God.

Ed tries to attack Father, but he no longer can use the alchemy. As Hohenheim attempts to activate his energy, Father scoffs at him and claims that he can create worlds in the palm of his hand since he is one with God. Hohenheim reveals that the souls haven't belonged to Father yet as the souls of the country's citizens are still connected to their bodies which are also known as the spirit. He has used many long years and countless calculations and had sent several souls of his body into the ground at several locations around the country in preparation for this day. Father states that the transmutation requires a circle to join them; otherwise, the power won't activate. However, Hohenheim replies that there is indeed a circle which can activate on its own, which is the shadow of the moon caused by the solar eclipse, activating an Umbra.

With the power of the circle rushing to Central, the souls of all the Amestrian people have returned to their respective souls. Without the fifty million Amestrian souls bolstering his power, he no longer has the strength to keep God contained within his body. Father angrily replies that he can always create another Philosopher's Stone using a hundred million or even a billion lives as they are so many human souls on this planet. He launches a wave of energy at his human foes, while Ed and Al supporting Hohenheim to keep up the fight, straining his Philosopher's Stone to block the wave with his hands.

Scar and Bradley continue to battle, and Bradley remarks that Scar is against his own God by using alchemy. Scar replies that God does not exist during the ceaseless massacre of his people. As Bradley prepares a killing blow with his sword, the sun peeks out from behind the moon, and the blade's reflection blinds him momentarily. Scar takes the chance to strike, and Bradley makes a final stab into Scar's body before both men collapse. Lan Fan appears on the scene and asks if he has any last words for his wife. Bradley coldly replies that he has none for her. Lan Fan senses life from his body and finds a Philosopher's Stone from his pocket. Heavily injured by Bradley, Scar asks Lan Fan to help him over to the five-point circle which is drawn by the doctor. He explains to her that location lies the centre of the Nationwide Transmutation Circle. Although his hatred is not gone, his desire to help Amestrian people has increased. He places both his hands on the floor, activating the runes upon his arms. The energy flows outward to the five points around Central City where Ishbalan refugees have laid down tarps emblazoned with the Reverse Nationwide Transmutation Circle and the circle activating itself around the entire country.

Hohenheim senses the transmutation and tells everyone that the time has come. Ed reveals that his alchemy is functioning again and uses it to attack Father and Pride. Scar explains to Lan Fan that his brother had studied both alchemy and purification arts. His brother discovers that Amestris was unable to use the full extent of the Earth's energy because there was a layer of Philosopher's Stone energy spread out under the entire country like an inhibitor. He combines the Amestrian national transmutation circle and the purification arts and neutralising the Philosopher's Stones to create a new transmutation circle. This allows the unlimited use of the planet's tectonic energy to obstruct the schemes of those who created the transmutation circle of blood in this country.

Ed deals Selim Bradley whereas the rest will chase after Father. Father rises up into the courtyard of Central Command and transmutes the souls of several Briggs soldiers into Philosopher's Stone. Izumi, Mustang, Al and May make their way towards the surface and they encounter the Armstrongs, Riza, and Sig on the landing above. Mustang explains his injury to Riza and asks her whether she still can fight with her injuries. Greed appears and arrives at the scene where Lan Fan and Scar recuperating.

Pride scoffs at Greed's betrayal, but Ed mocks Pride's willingness to obey Father without giving any thoughts to himself even though the Father never has any concerns at his current state. Pride thrusts his shadowy limbs into Ed's wounds, declaring his intention to use Ed to replace his crumbling body. However, within its own being, Kimblee's soul speaks up and states that Pride cannot be allowed to take Ed's body. Pride can't believe that Kimblee would be able to hold on to his individuality inside the vortex of souls and asks why he wants to interfere now. Kimblee responds that if Pride continues to fight, he will not say anything. However, Pride, who speaks of "honour as a Homunculus" is trying to escape into a human vessel which Pride always considered inferior when danger threatened his own existence. This causes Kimblee has lost his respect for Pride. Breaking free of Pride's grasp, Ed crushes Pride's skull with his automail arm, and the rest of the Homunculus' body crumbles to dust. But as Ed opens his fist, he reveals a tiny, sleeping embryonic pure form of Homunculus Pride. Cradling the little Pride back in his bundled cloak, Ed promises to apologise to Mrs Bradley later as Pride whimpers for its mother.

Hohenheim tries to stop Father from turning more Briggs soldiers into a new Philosopher's Stone. After Hohenheim remarking that Father's evolution has reached a dead end, Father states that he shall create humans and several people sprout out from his body. The lost souls of Xerxes wandering around and grateful to have returned to the world of the living.

Olivier, Mustang, Riza, Sig and the chimeras arrive on the surface. Greed…

Greed continues fighting Bradley, and when he tries to throw Greed from…