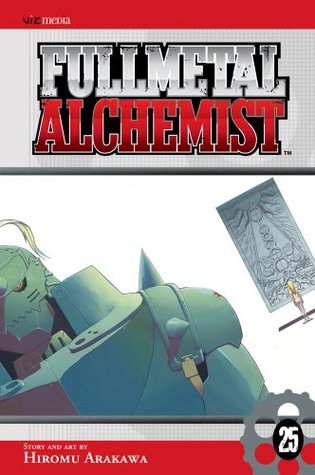 Greed continues fighting Bradley, and when he tries to throw Greed from the high building, it causes Greed to hold on the ledge while he holds on Greed's the other arm. Lan Fan comes into the rescue, but she has limited strength due to her automail arm inability to support the weight. Greed asks her to help Fu, but she says it's too late and ask for help from the Briggs soldiers. The Briggs soldiers fire on Bradley, causing him to let go and falls into the moat below him.

Ling shouts for any doctors skilled in alchemy to save Fu, but nobody responds to it. Buccaneer wakes up and Ling thanks for his effort of delivering a mortal blow to Bradley. Buccaneer, who is at a dying state, asks Ling or Greed to help him to guard the gate until Major General orders to open it. Ling asks Greed to lend his power to deal with the Central's troops while Lan Fan guards the entrance. Watching from the main gate, Dalman is confused whether Ling or Greed is taking control while a Briggs soldier is happy that Ling or Greed is on their side. Hearing those words, Buccaneer is happy that he can die in peace.

Ed and Izumi are transported to a mysterious room, and soon Al emerges as well. Just as they are wondering what is happening, Father arrives with Hohenheim trapped in his body. He tells them that the plan didn't work as expected when he tries to absorb the Philosopher's Stone within Hohenheim. Ed couldn't recognise who he is and ask Hohenheim. Hohenheim confirms that he is the Father, the clone of him. Ed has bad feelings on this and tries to talk to Al but only realises that Al still hasn't awake.

Meanwhile, Mustang's group continues fighting against the zombie soldiers. Unfortunately, Riza's gun jams up and gets pinned down, while Mustang's gloves are slashed when trying to help her and Scar is held at swordpoint. The doctor wants Mustang to perform human transmutation so his plan can proceed further and suggests to Mustang using Maes Hughes as the revival. Mustang knows that reviving the dead will never work, but the doctor doesn't need him to succeed. He wants Mustang to open the portal and return, but Mustang clearly refuses it. Since they are out of time, the doctor has one of the zombie soldiers to wound Riza.

At Olivier's place, they are wondering where Izumi is. Olivier asks the soldier to call the command centre for an update. The soldier returns with the bad news of Captain Buccaneer and his subordinates while several Xing warriors had killed Bradley.

The doctor tells Mustang to hurry and perform the transmutation or Riza will die. Riza encourages Mustang that she has order not to die as she is massively bleeding on the floor. The doctor shows the Philosopher's Stone and tells Mustang that he can use the stone to save Riza if Mustang does what he wants. After some thought, Mustang decides not to do it. The doctor is surprised with his heartless, and Mustang points out that he has no right to judge him after he sacrifices human beings for his experiments. He defends himself and says that the zombies are grateful for what he has given to them. Before the doctor responds further to Mustang, the doctor vanishes. The jar of the Philosopher's Stone drops to the floor. The doctor caught by the saliva of Jerso in his chimera form, which is hanging from the pipes around the ceiling. May and the transformed Zampano appears to fight with the zombie soldiers. She notices Riza's injury and uses her alchemy on Riza to stop her bleeding. When May finally has the chance to pick up the Philosopher's Stone, Bradley does it first. Bradley reveals that he is surprised that Mustang didn't perform the human transmutation. Mustang admits that he will do it in the past, but now he has someone to ensure that he is at the correct path. May senses strong energy beneath them, and the new intruder is Selim Bradley or Pride.

Darius is supporting the wounded Riza while Mustang is fighting against Bradley or Wrath. The doctor is stabbed by Pride's shadows and create a transmutation circle surrounding Wrath and Mustang to make Mustang a sacrifice, while the doctor's body is hoisted above it. In the city, the dogs are barking madly because the eclipse is starting.

Pride reveals that they are out of time and Bradley or Wrath forces Mustang to open The Gate, but Mustang insists that he won't do it. Since Pride has already assimilated an alchemist with the knowledge that they need, and the doctor holds the formula for human transmutation, they will use Mustang as a sacrifice by force to open The Gate and send him there. The procedure begins, and the doctor appears in a transmuted and disfigured bloated form. Wrath tells the group that Mustang is now with Father and challenges the remaining group to defeat him. Darius realises they can't beat him although he is injured. Then, they find out that Wrath is buying his time while Father and the sacrifices are underneath them.

Meanwhile, after seeing Truth, Mustang arrives at where the other sacrifices are, followed by Pride. Father tells Pride that everything is ready except Al's soul. After Mustang telling that he has seen The Gate, Mustang comments that he can only see darkness which Ed realises that Mustang's eyesight has been taken for being sent to The Gate.

Above them, Wrath realises the group is going to interfere Father, and Scar sneaks from behind to attack him. Wrath asks for his name, but Scar replies that he has none as he casts his aside, to which Wrath states that he doesn't know his name either and finds it amusing that two nameless men are fighting to the death.

May breaks into Father's lair and acknowledges despite his change of appearance, she still can sense Father's energy. May notices Al's body and tries to wake him up, while Al's mind is actually at The Gate where his human body is. Al wishes to have his human body back but realises how feeble the human body is, which he knows that he can't fight if he gets his human body back. Al knows that it is not the right time to get his human body back, and human Al states that he won't stop him if his soul residing in the armour wants to go back. As The Gate reopens, armour Al promises to come back, but human Al tells him that the world might be filled with despair with the choice. Al wakes up, and Father is now happy since all five sacrifices are present.

Mustang is confirmed that he really can't see and Ed states that Mustang must have been performing the human transmutation when seeing the portal, but Mustang insists that he didn't do it. Ed refuses to buy the idea when Father is telling them what they had sacrificed after performing the transmutation when they opened the gateway. Mustang was forced into The Gate against the which cost him his eyesight. May declares that she will be Father's opponent after Father acknowledging that he holds the secret to immortality. Al feels it's too much for May to handle and Ed comments that taking Pride down is as hard as taking down his boss. Suddenly, Ed is wondering why the Homunculi would spend so much time trying to persuade them to cooperate if they could simply force someone through The Gate. Then, Mustang mentions that it had been the last resort for them and must be taking a significant risk. As Selim's face deteriorates further, Ed and Al begin their attack, realising that Pride is not attacking but trying to run away or block the attack. May launches her own attack against Father, Hohenheim breaks his face free of Father's body to warn her that the opponent can transmute without moving. Unfortunately, it is too late as May is seriously injured by a transmutation when her body comes into contact with Father's form.

As the solar eclipse begins, the Ishbalan refugees rushing to the specific point around Central City, laying down tarps and entrusting the rest to Scar.

Scar continues to fight against the injured Wrath, who reveals that he has been waiting for this time to have a fight to the death without social and political burdens. Wrath begins his onslaught as Scar attempts to block with the Destruction Alchemy of his right arm. Scar sees this chance and breaks one of his opponent's twin swords. Wrath tries to fight back, but Scar uses his alchemy to create large spikes which appear from the floor to injure his enemy. Then, Scar explains his choice and removing his cloak to reveal the tattoo on his left arm, which holds the secrets found in his brother's research notes, the power of reconstruction.

Ed sends Al to help May while he takes care of Pride.…