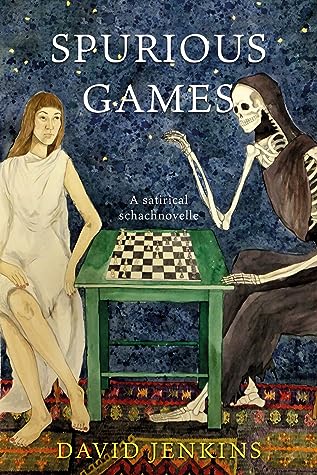 Detective Inspector John Logos is confined by his health deterioration which forces him to work on a desk job at the St Brostal police station. At the present state, DI Logos may be lacking in physical fitness and experienced marriage disintegration, however, he has an impressive background before joining the cops and also is a formidable chess player.

Detective Sergeant Colin Woodman calls in to report a body has been found in the back bar. The victim is a member of the famous Carrick Chess Club and also a recent winner of the Cornwall County Chess brilliancy prize. When the investigation begins, DI Logos receives an email from an unknown person who called himself 'The Turk', sending him a message with chess-related clues. Are the clues come from the killer, an accessory or from a whistleblower offering help? While the first case is still under investigation, another death occurs again. And DI Logos believes that he is not only chasing a murderer, but a serial killer. Working together with the Welsh professor of plagiarism, will DI Logos able to apprehend the serial killer 'the Turk' who is eccentric and obsessed with the Cornish chess and taunting the detectives with chess-related clues?

I felt the story was amusing, especially with the uncommon names and terms such as Professor of Psychology and Plagiarism, Professor of Money Laundering, Julian Assange Solutions, Chubby Checker and etc. The novel was written with an unusual choice of words, or maybe my limited vocabulary is unable to catch up with the author's high-level vocabulary. Nevertheless, I can sense the author is an extremely knowledgeable person who has extensive knowledge in various fields. I might not understand some of the histories mentioned in this book, somehow, I quite admire the author's brilliance and his expertise in chess.

To be honest, I almost want to give up this book until it reaches the probability theory and Nash Equilibrium, which is something that I learned when I was in university. I wasn't really good at that subject, but at least it helps me a bit to understand the story. The storyline is quite refreshing, using chess games to analyse the murder case and to find out the next possible murder victim.

I wish I can enjoy chess like the author, but unfortunately, I totally couldn't grasp the complexity of the game. Leaving the chess and other irrelevant philosophical content aside, the case itself is very intriguing. And the characters are hilarious or colourful respectively.

Thanks to NetGalley and Troubador Publishing Ltd. (Matador) for providing me with a free review copy in exchange for my honest opinion.

Rating: ★★★ (3/5)
More reviews can be found on Goodreads: Spurious Games by David Jenkins.

First narrator Toshi tells a brief story of her life, including her…

Olivier, Mustang, Riza, Sig and the chimeras arrive on the surface. Greed…