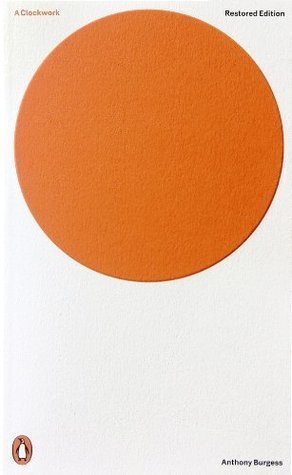 The entire story is narrated by the protagonist, Alex, with heavy usage of Nadsat language. Nadsat is a Russian-influenced fictional slang invented by the author. The teenagers use the dialect or 'nadsats', with the name coming from the Russian suffix for 'teen'.

The story sets in a near-future dystopian city governed by a repressive, totalitarian super-State. Alex and his friends or droogs (in Nadsat language) are hanging out in the Korova Milk Bar. They drink "milk-plus" - a beverage of milk which has the customer's drug of choice, preparing for their crime night. Then, they begin their evening by assaulting a scholar on the street, ripping out his false teeth, tearing up his books and stripping off his clothes. Later, they rob cigarettes from a shop and severely beat the shopkeeper and his wife. They even beat up a drunk old man on the street and fight with a rival gang. Joyriding through the countryside in a stolen car, they break into an isolated cottage and terrorise the young couple living there, beating the husband and gang-raping his wife.

On the next day, one of Alex's friends, Georgie, challenges his leadership, but he stamps his authority against his gang members with violence. Although Alex wins the fight, the gang members betray him when he is arrested for a house robbery of a wealthy old woman. And this time, his youth doesn't allow him to escape from his wrongdoing when the old woman dies after the assault. The first part of the story gives us the background of a series of crimes committed by Alex and his gang members up to the point of his arrest. The whole part never reveals his age until the last sentence, telling us that he is just fifteen.

The second part of the story begins with the revelation of his 14-year imprisonment, leading us to know more about his life with other inmates. Alex later gets chosen to be the first person to a new correction program called Reclamation Treatment for two weeks. On the first day, the guard brings him to a new building where he has his own room with new clothes, slippers, magazines and cigarettes with his lunch. He feels happy with the new environment, and nothing can be luckier when being told that his treatment is to watch a series of "special films". Dr Brodsky's assistant Dr Branom examines Alex's health and mentions an injection after every meal, which Alex thinks is a nutritional supplement. When Alex is too weak to attend the first session, he assumes it is due to prison malnourishment, as Dr Branom tells him earlier.

In the screening room, the attendants strap him to the dentist's chair. They fasten the clips to his forehead, which pull and keep his eyelids open. Dr Brodsky begins his treatment with a series of violent and disturbing films. Alex is forced to watch all of them even after he pleads them to stop. The Ludovico's Technique, an experimental behavioural modification treatment, is repeated for two weeks until the patient is "cured". Alex's behaviour changes whenever his desire to gets violent is triggered. He compares his sickness to a detective watching around the corner, similarly to an internalised police force.

In the last part of the story, Alex tells us about his life after releasing him from prison. Will the treatment really "cure" him, and how will Alex's life as a clockwork orange look like in the real world?

Alex is well portrayed as a teenager with arrogance, immaturity, and limited meaningful vocabularies. He does sadistic things because he derives pleasure from them and for no other reason.

The fictional society is the result of the combination of elements from both communist and capitalist societies. The danger of totalitarianism that doesn't offer any freedom for young people to express their criticism or opinions about the government may lead to violence or other dangerous acts, creating fear and insecurity in other citizens. The State's ideology believes that humans can always become virtuous and good through education and reform because of the assumption that humans are morally perfectible.

In contrast, Alex believes humans have the right or choice to act evil. A government that doesn't allow its citizens to misbehave is a government that denies its citizens their right to be human beings. He also believes that if God created humans' goodness, then God must have also created the humans' evil side. If a government attempts to eradicate one, it is rejecting God's most beloved creation. His resistance to the State's radical and logical thought by using his intuition is the only choice he has under the oppressive regime and the only way to bring out his identity and the genuine part of him.

Human beings have the free will to choose between good and evil. If the option of bad behaviour removes from human beings, humans will be ceased to become God's creation. The Reclamation Treatment is a psychological behaviour alteration that turns Alex into a State-creates mechanism - a "clockwork orange". I can't read this book or understand the story without a Nadsat dictionary and analysis from Spark Notes. It will be an ordinary story without an in-depth analysis of the themes and symbolism which exist in the book.

A Perfect Crime by A Yi, Anna Holmwood

The Lord of the Rings by J.R.R. Tolkien