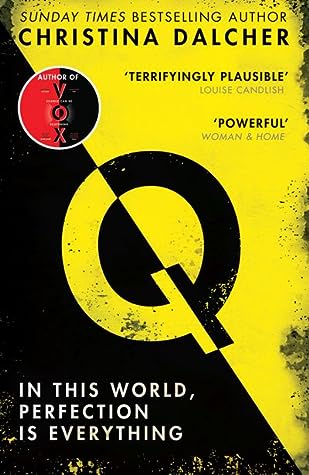 Everyone has a quotient or 'Q' score. Students with a Q score lower than nine will not be able to make their payment at the priority line, specifically for students with higher Q scores. There are different lines and tiers for different rankings of people. There are also different colours of buses for school children. High Q scores will take the silver-coloured bus to the elite schools, and lower than nine will take the green-coloured bus to a different school. Students with low Q scores will be taking the yellow-coloured bus, which usually operates once a month after the testing day.

Elena's husband Malcolm is a deputy secretary in the Department of Education, the inventor for the tier system and the Q rankings. 'Q' involves grades, attendance records and participation. It also includes parents' education and income, and also siblings' performance. Everyone of school or working age has a Q, and each month it's recalculated. Suppose a student's Q score drops below nine. In that case, the teacher will contact the parents to give the family the time to prepare themselves and spend more time with their child before the yellow bus comes and takes their child away. Due to the overcrowding of third-tier students in urban areas, state schools have been moved to farmland, far away from their families.

Elena has two daughters. The eldest daughter Anne has a high Q score due to her excellent performance in academics. Unfortunately, the younger daughter Freddie doesn't have a high Q score as her sister. When Elena's youngest daughter Freddie fails the test and the Q score drops below 9, Elena has to come out with a plan to rescue her daughter from being taken away from her. She can't get any help from her self-centred and controlling husband, who only acknowledges the existence of his eldest daughter.

It's mysterious and gives me the chill as I was reading it, but unsure what will happen next. The husband Malcolm is a piece of work that I can visualise how he looks, given that there is a politician in my mind who probably can fit into that character.

I felt disappointed when it came to the part of Elena's trip to Kansas. She becomes a different person, and her attitude changes overnight. She becomes a hypocrite, complaining about his judgmental husband, but at the same time, she does the same when she meets Ruby. She doesn't swear much and always maintains her elegance due to her level of education, but out of nowhere, this part appears, which is totally different from her personality since the beginning of the story.

"I'm not a weak woman. I work out, running treadmills and hefting free weights a few times a week. I don't need a man to carry my luggage or put me on a pedestal or worry over whether I might break a nail. But man, that fucker was one heavy suitcase. I'm glad to see it go, less glad to see the face of the person who takes it from me."

I know that I'm probably being picky here, or maybe it's because I've read this kind of writing style for uncountable times, and it's really pissing me off. First of all, the story never mentioned any workouts during weekdays, and suddenly, she defends her strong ability with her diligence workout. She was portrayed as a caring mother who made breakfast every morning before work and returned home taking care of the family after work. I don't know where is the time for the workout and "a few times a week".

The inconsistency is not the one that annoyed me. The part "I'm not a weak woman" or "I don't need a man to…" really boils me up. Most of the time, I forget the title of the book that I'm reading, and I don't even remember the author's name until I write a review about it. However, when those two sentences appear in the story, I know those come from women authors most of the time. I had never seen "I'm not a weak man" before. I don't want to set gender to a book, but I really wish any authors, please spare me from this nonsense. I'm alright if the author wants to thrash a man if he is as bad as being portrayed in the story, such as Elena's husband, Malcolm. Please stop showing any gender strength or hate before giving the background of a new character. You already know who is the new character and why she hates him, but we don't. It gives negativity to the character, and nobody is questioning anyone's ability here. When a man helps a woman do something, she feels belittled, but he is an inconsiderate man if he doesn't help. I would rather that part be removed from the story because it's irrelevant, or she is glad he offers to take the heavy suitcase from her despite her hating him. What's with all this treadmill and "I'm not a weak woman" nonsense? It's just a suitcase.

Ironically, Malcolm's family name is called Fairchild, but he's not really fair to the children. The entire story is mesmerising and thought-provoking. The beginning was captivating, and it ends vaguely well. It's just Elena turns into a different person in the middle of the story, a few inconsistencies here and there and some characters suddenly brighter than before. I don't find any likeable characters in the story. Somehow, it seems like a story of Elena doesn't have a happy school life due to her nerdiness. She wants whatever bad treatments she has coped with will flip back to the unintelligent ones. It happens in her favour, and she treats them like how she was treated. However, her avenging ideas turn into a nightmare when she becomes a mother, and karma hits her daughter.

The Secret of Chimneys (Superintendent Battle #1) by Agatha Christie