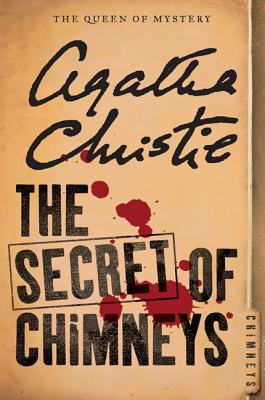 Anthony Cade hates his current job as a tour guide for Castle's Select Tours in Bulawayo but has no choice due to financial difficulties. He meets his old friend James McGrath, and James offers him a job. Anthony agrees to deliver a manuscript of Count Stylptitch's memoir to a publisher in London. Since he's going to England, James hopes that he can deliver a letter to a woman in person who is staying at Chimneys, one of the stately homes of England. The woman's name is Virginia Revel. James hopes Anthony can return the letters to her without the risk of being known by her jealous husband.

On the first night when Anthony arrives in London, Baron Lolopretjzyl, London representative of the Loyalist Party of Herzoslovakia, pays him a visit. Baron offers to buy the manuscript to avoid publication. The manuscript is believed to be scandalous, and the book's publication will disturb the peace of the country. The memoirs were written by the late Count Stylptitch of Herzoslovakia. The discovery of oil causes the division between republicans and royalists. After rejecting Baron's offer, someone who claims himself as the Comrade of the Red Hand comes to Anthony's room and threatens to shoot Anthony if he doesn't give the manuscript to him. Anthony manages to fight over him, but the man escapes. He decides to order room service as a precaution and prepares to read the manuscripts after that. Due to the illegible handwriting, he finds it dull and goes to sleep. After a few hours, he is awakened by a rustling sound and realises that the waiter who sent him the food before searching his suitcase. Probably mistaken the letters with the manuscripts, he flees through the window after having a tussle with Anthony.

After the incident, the man tries to blackmail Virginia with the letters. Although Virginia didn't write those letters, the signature belongs to her. Despite that, she chooses to play along and asks him to come back tomorrow for more money. The next day, a fake telegraph is sent by someone else, and all her servants go to Chimneys except the maid. When Virginia enters the study room, she finds the blackmailer has died on the chair. Coincidentally, Anthony arrives in front of the house simultaneously, and she asks him for help.

At Chimneys, one of Lord Caterham's guests, Count Stanislaus, is murdered on the first night of his arrival. Mr Lomax decides to request Superintendent Battle's assistance as they require the case to be at the utmost discretion. When Battle arrives at Chimneys, they reveal to him that the deceased is the heir of Herzoslovakia.

This first story from the Superintendent Battle series is more like an introduction to the character Superintendent Battle. The main focus is on Anthony Cade, and he solves the case from the beginning until the end. Classic mysteries are more complicated, unpredictable, more than one crime happening simultaneously, require readers' analytical and problem-solving skills, and strong character development with an in-depth background. The characters usually have some sense of humour, more individual personality traits, and are not too straightforward compared to modern mysteries.

One-Sentence Summary: The Chamber of Secrets reopens after being sealed for 50…

Everyone has a quotient or 'Q' score. Students with a Q score…